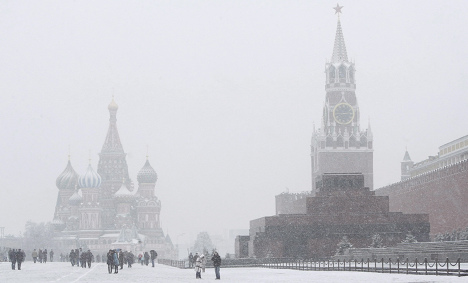 The man and woman, who German media said are married, were arrested last October after police raided their home in the western town of Ballingen, reportedly catching the woman red-handed listening to coded messages.

The federal prosecutor’s office identified the two suspects only by their “aliases”, Andreas and Heidrun A.

It said they had established residency in Germany in 1988 using fake Austrian documentation, setting up a “middle-class existence to cover up their activity for the secret services”.

It was a year before the Berlin Wall fell and the Russian security services (SVR) were still the Soviet Union’s KGB.

“The accused had the task of gathering information about the political and military strategy of the EU and NATO,” the prosecutor’s office said.

They are accused of running another agent from October 2008 to August 2011 who spirited official documents about EU and NATO affairs from the Dutch foreign ministry to them.

“The accused, alias Andreas A., then delivered them to his headquarters via so-called dead letterboxes,” it said.

“Until their arrest on October 18, 2011 they also provided political-social information about general and security-relevant political aspects of relations between Germany, the EU and NATO to Russia.”

During that time they allegedly remained in constant contact with the SVR, via satellite transmissions and “an Internet video portal.”

In exchange, they received nearly €100,000 in payments per year for their services as spies, the prosecutor’s office said.

Germany’s domestic intelligence services discovered the couple after receiving a tip from the FBI in the United States, which had unmasked Russian SVR agents on its own soil.

Der Spiegel reported last year that Andreas and Heidrun were believed to have married in 1990 and have one daughter, but the prosecutor’s office declined to confirm this.