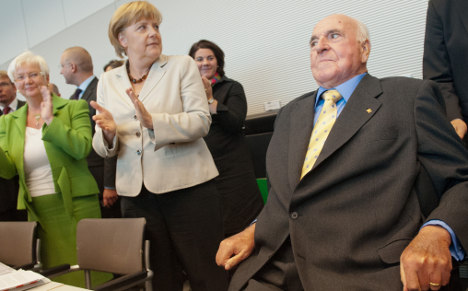 Merkel will give a speech at Berlin’s German Historical Museum in honour of the 82-year-old colossus of German politics who is credited with shepherding both Germany’s peaceful unification and pivotal chapters of European integration.

Commentators said Thursday’s event would serve to depict Merkel as his rightful political heir and executor of his legacy, while also attempting to take the “Germany’s elder statesman” ticket away from former Social Democrat chancellor Helmut Schmidt.

“Considering the reservations against the euro rescue packages among the CDU rank-and-file, it is quite useful to be able to remind people that the euro was born during the era of the ‘Europe chancellor’ Kohl,” the Süddeutsche Zeitung newspaper wrote, referring to their conservative party.

It noted that Kohl had reportedly criticised Merkel for having “no compass” in her European policy and even charging that she was “destroying my Europe” – an allegation albeit that his aides later denied.

“Such things should be history after this appearance together on Thursday,” the newspaper said.

Merkel was the one who effectively sealed Kohl’s departure from CDU politics when he was embroiled in a donations scandal, refusing to name those who had made illegal financial gifts to the party.

Although she is Germany’s most popular politician and widely expected to win a third term in elections next year, Merkel is often criticised for lacking a “vision” to lead the 17-nation eurozone out of the worst crisis in its history.

Not many of his sort left

Former EU commissioner Günther Verheugen, a German from the opposition Social Democrats, said Kohl was unique in serving as a beacon for Europe. “There aren’t many people like that anymore,” he told Berlin public broadcaster Inforadio.

“The only one I still see today who would live up to that standard comes from the Helmut Kohl school and that is Luxembourg Prime Minister (and eurozone finance minister chief) Jean-Claude Juncker.”

Merkel, 58, has had to contend with constant sniping from backbenchers in her own centre-right coalition questioning Germany’s commitment to ever larger aid packages for stricken eurozone nations.

Kohl, who is now confined to a wheelchair and his speech has been severely impaired since his jaw was paralysed in a fall, exited active politics in 2002.

But his influence is still palpable in Berlin’s corridors of power, where he is revered as the “chancellor of German unity” despite the taint from scandals in later years in power.

On Tuesday, Kohl took part for the first time in 10 years in a meeting of the CDU’s parliamentary group, which Merkel also attended, to celebrate the anniversary of his election on October 1, 1982.

After basking in a lengthy round of applause, Kohl used the occasion to rally MPs to the European cause.

Merkel was his ‘girl’

“Europe is our future,” he said during brief remarks, according to participants, and called on lawmakers to put aside national “egotism” in favour of shared European interests.

Merkel grew up in communist East Germany and learned politics in Kohl’s shadow, joining his cabinet and known affectionately, if condescendingly, as his “girl”.

But it was her 1999 bid to sideline Kohl, who had governed Germany for a record 16 years and ran their conservative Christian Democratic Union for a quarter-century, over a party slush fund affair that catapulted her to power.

Their rapprochement has progressed in fits and starts, with the eurozone crisis laying bare both their differences and their shared principles.

Merkel biographer Gerd Langguth said that while there was little love lost between Merkel and Kohl, her leadership style bore many of his hallmarks.

“Merkel, in a certain way, imitates Kohl’s style in the way she practices politics,” Langguth said.

But he noted that while Kohl was a dyed-in-the-wool conservative, Merkel was a pragmatic centrist who had a tendency to co-opt the winning positions of the opposition when it suited her.

Such shifts include her qualified support for a national minimum wage and her decision last year to phase out nuclear power.

Despite the popularity and influence of Forbes magazine’s most powerful woman in the world, Langguth said that Merkel “has yet to eclipse Kohl” in light of his longevity, role in German unification and contributions to Europe.

But he said that for many in Germany, the memory of his achievements had already begun to fade.