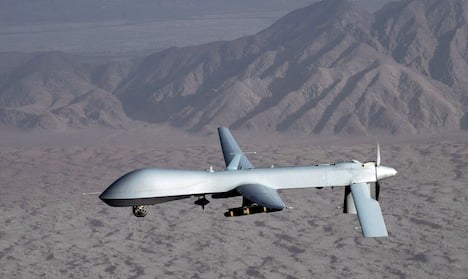 But despite a continuing ethical debate over whether or not to use armed drones – as the US military does in its anti-terrorism campaign – there is support in Germany to move in that direction.

The Commander of the German Air Force, or Luftwaffe maintained in a recent paper called “Air Power 2030” that there should be no question over Germany’s use of the capabilities of unmanned aircraft in “all areas,” including the use of weapons, the newspaper said.

But where Germany will get those future drones remains an open question. The country has a leasing contract for Israeli-built Heron 1 drones that expires at the end of 2014.

Defence Minister Thomas De Maizière and most specialists in the ruling coalition of Christian Democrats (CDU), Free Democrats (FDP), and the Christian Social Union (CSU), as well as some members of the opposition Social Democrats (SPD), want a long-term and multinational collaboration to develop European “unmanned aerial vehicles,” the paper reports.

France and Germany already have signed a corresponding letter of intent.

The Air Force’s Commander, Lieutenant General Karl Müllner, supports a purchase of the US Predator B drones, because they are regularly available, are a proven quantity, and are used by many NATO partners, the Süddeutsche Zeitung said.

But some politicians broth both the CDU and SPD argue that the purchase of US drones would deter development of a European drone, which they hope will reduce German dependence on US technology. The Defence Ministry has allotted €660 million over the next four years for the development of European unmanned aerial vehicles.

The parliamentary commissioner for the armed forces Helmut Königshaus voiced his strong support for armed drones to the Süddeutsche Zeitung.

“If our soldiers had the availability of armed drones, they would no longer have to look on helplessly when our own people are being threatened, but instead could attack and drive out their opponents without harming their own units,” he said.