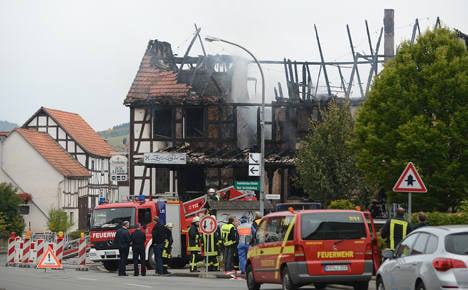 The fire broke out in the two-story half-timbered house, home to a family-run restaurant in Lichtenfels, Hesse, at around 2am on Monday and spread quickly.

The 38-year-old restaurant owner managed to escape the flames and has been taken to hospital but has not yet been able to speak to authorities as he is in shock. Police said he was very drunk when he was admitted.

The bodies of his 34-year-old wife and her 28-year-old sister are thought to have been identified in the wreckage. Two girls aged six and ten are still missing and presumed dead, police said early Monday afternoon.

“There is no evidence to suggest that they left the building,” a spokesman added.

Investigators have been hindered from going in to search for the girls properly, or to remove the two bodies they think are in there, because it has been deemed too dangerous.

“At the moment the building is at risk of collapsing, so the fire service is not inside,” Wilfried Maier from the Lichtenfels police told The Local on Monday morning.

People from neighbouring houses were told to leave their houses while the restaurant burned, but, “none of the surrounding buildings are in any immediate danger,” said Maier.

He added that it could be some time until the emergency services could get inside, but that the initial fire had been brought under control.