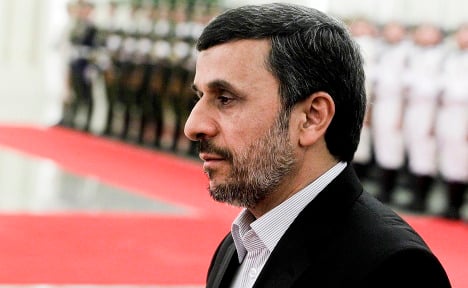 The EU is working on more sanctions as President Mahmoud Ahmadinejad seeks to counter the pressure on his country at this week’s UN General Assembly in New York.

Ahmadinejad met UN leader Ban Ki-moon on Sunday as the EU foreign policy chief held talks on Iran and other topics with US Secretary of State Hillary Clinton in New York.

Details of the new EU measures are still being worked on but foreign ministers from the 27-nation bloc will discuss the move at a meeting in Brussels on October 15.

The United States and its European allies say that Iran is working toward a nuclear bomb. Iran says its research is for peaceful energy purposes. There has been mounting speculation in recent months that Israel is planning a military strike on Iran’s bunkered nuclear facilities.

The United States, Britain and France warned at the UN Security Council last week that time is running out for a negotiated solution with Iran.

“It is necessary that we sharpen the sanctions,” said a second western official, confirming the request by foreign ministers William Hague of Britain, Laurent Fabius of France and Guido Westerwelle of Germany.

“We think there is still time for a political solution, a diplomatic solution, and this is what we are working for. But we cannot accept nuclear weapons in the hands of Iran,” said the official, also speaking on condition of anonymity.

Ashton is to chair a meeting in New York on Thursday of the six nations – the EU three, plus the United States, Russia and China – who have been seeking to negotiate a solution with Iran.

The international community has pursued a dual track of pressure through sanctions while seeking to negotiate. But the US and European nations say Iran is refusing to talk.

Ban and Ahmadinejad also discussed the war in Syria and the protests in the Muslim world against a US-made film that mocks Islam.

The showdown with Iran is one of the key topics at the UN assembly where Israel’s Prime Minister Benjamin Netanyahu is also scheduled to speak.

Ahmadinejad, who will address world leaders on Wednesday, is probably making his last appearance at the UN assembly where he has become a controversial figure.

Western nations regularly walk out of his speeches in protest at his anti-Israeli comments.