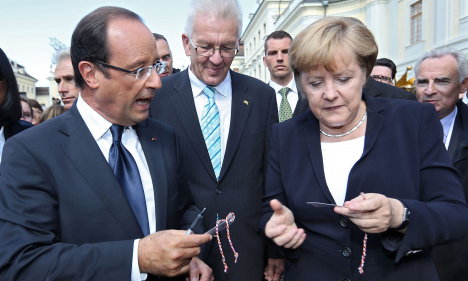 reconciliation, there was disagreement at the weekend about plans to monitor Europe’s crisis-hit banks.

But despite affirmations that European unity was the only way out of the debt turmoil lashing the euro, they differed over a key plank of crisis-fighting: tighter checks on the European banking sector.

“I support a banking union, it is an important measure and we must proceed step-by-step,” Hollande told reporters, while stressing that such a framework should be in place “the earlier the better”.

“For me it is important that quality is ensured. It is pointless to do something very quickly that in the end doesn’t work,” she said.

“It must be thorough, it must be of good quality and then we’ll see how long it takes. We will get our finance ministers to work with each other on it as quickly as possible.”

EU leaders agreed the new bank supervision system in June as part of a deal to allow the bloc’s rescue funds to lend directly to stricken banks instead of passing aid through countries and so adding to their debt woes.

It is a first step towards a banking union and dovetails with moves towards the deeper economic and political cooperation aimed at taming the debt crisis which has brought the eurozone economy to a standstill.

But the proposal has driven a wedge between Germany and France, the team that sees itself as the engine of European integration.

While France would like to hand the European Central Bank power to supervise all 6,000 eurozone banks from January, Germany would like it to only keep an eye on big banks and is in little hurry.

Merkel and Hollande were celebrating the day 50 years ago when De Gaulle spoke to young Germans, in their own language and without notes, and offered a new beginning in bilateral ties.

Merkel and Hollande, who have struggled to keep their initial friction to a minimum since the president took office in May, also discussed a mooted merger between EADS and Britain’s BAE to create what would be the global aeronautics industry’s sector leader.

France and Germany hold major stakes in EADS, while the British state has a golden share in BAE. Saturday’s festivities were the latest in a series of events celebrating 50 years of partnership between the wartime foes, now the EU’s two biggest economies.