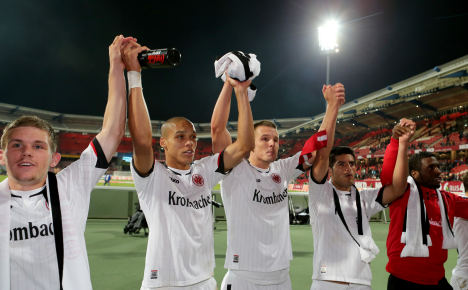 Erwin Hoffer got the first goal in the 25th minute, slicing in a shot as the Nuremberg defence failed to cope with a corner. Japan midfielder Takashi Inui scored on the hour with an impressive run and shot into the corner.

However, Sebastian Polter ensured a nervy finish for the visitors when he pulled one back with 14 minutes, heading in Hiroshi Kiyotake’s free kick.

The victory moved Frankfurt into provisional top slot in the standings.

“I think we showed we’re a strong team,” goalscorer Hoffer told Bundesliga TV. “We will have to see what happens from game to game but of course, we’re very happy with what we’ve already achieved.”

“If I were wearing a hat I would take it off (to the players),” said Eintracht coach Armin Veh.

“We are enjoying it, but we know we have to stay composed,” said Veh, stressing that the players should keep their feet on the ground and concentrate on avoiding relegation. “Perhaps there are different times around the corner.”

No promoted side has ever taken 12 points from its first four games in the Bundesliga’s 50-year history.

The win put Frankfurt three points ahead of Bayern Munich who were to play on Saturday, looking to go top on goal difference if they could also manage a fourth win. It was the first defeat of the league season for Nuremberg.