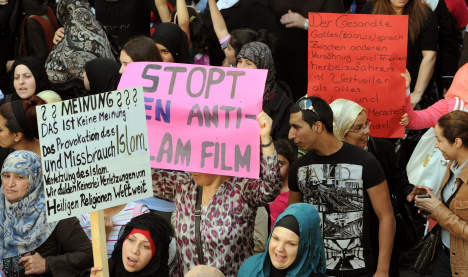 Around 800 demonstrators marched through the centre of the southwestern German city of Freiburg under the banner “I Love My Prophet”.

Protesters hoisted signs reading “Yes to freedom of expression, no to insults” and “I am protesting against the lack of respect toward my beloved Prophet Mohammed”.

Freiburg was the first German city to approve such a march but imposed strict conditions including a ban on participants using outlawed slogans, carrying potentially dangerous objects or covering their faces.

Another 500 people gathered in the western city of Münster, police said. German Chancellor Angela Merkel’s spokesman Steffen Seibert had earlier called for the protests to remain peaceful, saying violence was never justified in religious disputes, whether in Germany or abroad.

“That should be our watchword, everywhere,” he told a regular government news conference.

Further protests were expected Saturday in the cities of Karlsruhe and Dortmund. Police said they expected them to remain peaceful.

Fresh demonstrations erupted across the Muslim world Friday against the US-made film and French caricatures of the prophet Mohammed.