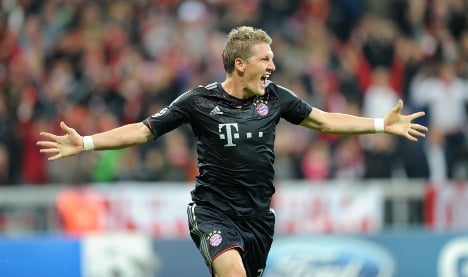 Bastian Schweinsteiger gave Munich the lead in the 38th minute and then Toni Kroos doubled the advantage after 76 minutes for the 2012 finalists.

Nelson Valdez pulled a goal back a minute into injury time.

Bayern’s Croatian international striker Mario Mandzukic could have restored the two goal advantage but his penalty was saved in the third minute of injury-time after Valencia’s Adil Rami was sent off for a second bookable offence.

Bayern were rarely challenged until Valdez’s late goal in the showdown in Group F, which sees them top the group with Belarus side BATE Borisov, who stunned French side Lille 3-1 also on Wednesday.

Munich boss Jupp Heynckes made four changes to his Bundesliga line-up from the weekend with Arjen Robben, Franck Ribery and Claudio Pizarro returning while new buy Javi Martinez made his first start in the place of Luiz Gustavo.

Valencia had three changes from the weekend with Joao Pereira, Ricardo Costa and Andres Guardado.

Bayern had the first chance of the game after four minutes but Kroos shot over the bar from 11 yards out.

Munich never let up and continued to dominate, Kroos was close again 15 minutes later but Valencia keeper Diego Alves made a good save.

Then Robben’s dangerous shot in the 35th minute was deflected wide right and Dante’s header was fisted away just seconds later.

Bayern finally broke through after 38 minutes with Ribery passing to Robben, who instead of shooting passed to Schweinsteiger and the midfielder’s effort was deflected by Aly Cissokho into the far corner to make it 1-0 for the hosts.

The Spanish side finally ventured forward in the 52nd minute but Bayern keeper Manuel Neuer had no problem stopping Guardado’s long distance strike.

The energetic Kroos went close again in the 58th minute with a blast from the edge of the box which keeper Diego Alves had to tip over his crossbar.

Valencia had another chance in the 68th minute on a counter attack but Jerome Boateng deflected Sofiane Feghouli’s attempt for a corner.

Kroos found the back of the net in the 76th minute with a right foot blast into the upper left corner from about 18 yards out to wrap up the points.

Valencia pulled a goal back a minute into injury time with a header by Valdez but Mandzukic’s hopes of scoring on his Champions League debut were frustrated as Diego Alves got down to save his penalty.