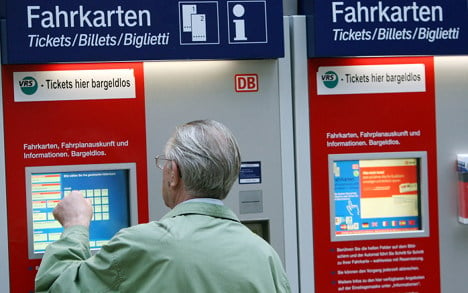 Reported attacks on cash points may have halved between 2010 and 2011 but the BKA said incidents of manipulated train ticket machines were being reported for the first time across Germany.

The BKA received 25 reports of ticket machines that had been fiddled with last year, Tuesday’s Die Welt newspaper said. Culprits seem to have stuck with ATM tried and tested “skimming” technology, where a person’s details are stolen from a credit or debit card magnetic strip.

But thanks to what BKA president Jörg Zierke attributed to anti-skimming technology in 60,000 ATM machines and moving to Chip and Pin payments, the number of hacking cases sank from 3,180 in 2010 to 1,300 in 2011.

Losses through fraud amounted to, the BKA said, around €35 million last year and nearly double this the year before.

The sinking figures appear to be continuing into 2012 though, with just 400 reported cases of ATM machines being manipulated between January and July, the BKA said.

Cancelling a credit or debit card can now be done more quickly, said Hans-Werner Niklasch, president of company which operates Germany’s EC payment system. He added that this, along with the updating of 94 million bank cards, had contributed significantly to the drop in fraud cases.