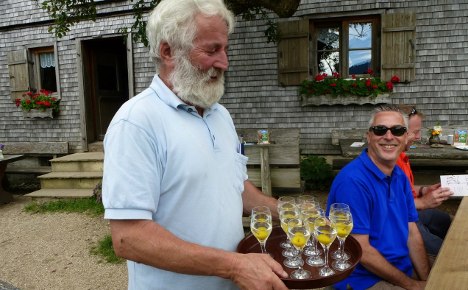 Shots of Schnapps for the Schrothlers. Photo: private.

While some pay for life coaches and personal trainers to shed unwelcome kilos, the Germans have figured out a way to make a detox program that resembles a wild spring break. The secret lies in few calories – accompanied by a few beverages.

The setting is Oberstaufen, a bucolic fantasy resort town in the Allgäu region of Bavaria, where cows dot the hillsides, flowers burst from every windowsill and pavements look clean enough to sleep on.

Almost every day, locals put on a concert or dance performance, where red-cheeked children and their parents, all in dirndls and lederhosen, entertain visitors with some foot-slapping, old world Bavaria charm. It harks back to a time when people were healthy, fit, hard-working and spiritually content.

Yet under this glossy veneer of traditional Bavaria lies the genius of a wellness empire that keeps its dieters happy with free glasses of Schnapps and one-litre bottles of wine to go with a dinner of about 200 calories.

Get drunk enough to forget hunger

Yes, the Germans have discovered that the secret of a successful weight-loss program lies in getting people drunk enough to forget about their hunger.

This town of 7,000 inhabitants is officially ‘Schrothkur certified,’ meaning it has the monopoly on a diet invented 180 years ago and brought to Oberstaufen in 1949.

The inventor, Johann Schroth, was a naturopath who came from a region of the Austro-Hungarian Empire that is now a part of the Czech Republic.

After observing that horses refrained from eating when injured, he developed a wellness program for humans that he believed would not only heal their injuries but also detoxify their bodies.

The Schrothkur has four basic principles: consuming a few hundred calories a day in the form of vegetables, cooked fruit, and salt-free crackers; a packing or wrapping of freezing cold sheets which are covered in hot water bottles and blankets at around 4 in the morning; interspersing moderate exercise with rest and relaxation; and finally – the little gem of this regimen – alternating dry and ‘drink’ days.

“They said the alcohol was to help spur on our immune system,” said Gina Hoff, the author’s mother who was eager to finally go on a vacation that would bring her home thinner than before.

“But, I think it is really just to keep us happy with only eating a few steamed vegetables every day. But, hey, it works!”

Upon arriving at one of the dozens of Schrothkur hotels in Oberstaufen, wellness seekers are immediately sent to a ‘kur’ doctor for a check-up.

A few pokes, prods, and €50 later, they are sent out the door with a prescription to start the program.

As can be expected, the first night is a drink night with half a bottle of kur wine to accompany the puréed plum soup.

This assists in numbing the hunger pains enough to descend into a deep slumber – until 4am when someone comes into the room with the rather unpleasant wrapping.

It is supposed to help get poisons out of the body and probably assists in preventing a hangover the next day – which is a ‘dry’ one. Beverages are limited and wine is prohibited, though the Schnapps flows freely.

The wrapping is also supposed to stimulate circulation and the body’s metabolism, while the change of fluid intake on the dry and drink days is claimed to activate the body’s immune system, which results in detoxification.

Another important element of the program is group support. In some hotels, like Hotel Kronenhof, ‘Schrothlers’ are sequestered in a separate dining room for their meals so they are not tempted by the smells of freshly brewed coffee and oven-fresh croissants that the hiking guests are served.

“The first thing I noticed was that everyone kept saying that they weren’t hungry,” said Anne O’Donnell, a friend of the author’s who joined for the detox week.

“I’m sorry, but when I looked at my plate of 5 prunes, I knew there was a lot of group-think at work here. Luckily, I had sneaked some marzipan into my room.”

Hours between meals filled with activities – and booze

The hotels also organize activities to keep the ‘Schrothlers’ busy and their minds off food. With skiing in the wintertime and Nordic walking in the summer, the hours are filled until the next mealtime.

If one is lucky, this will also include a guided Alpine hike with 76-year-old Georg Sheerer, head of the hotel – and his bottle of Schnapps that turns the hungry and downtrodden troop into a gang of happy, singing, drunk, middle-aged school-kids. The booze also increases enthusiasm for the next meal of puréed carrots and vegetable soup.

With more than a million visitors a year, many who come strictly for the diet, it is no wonder Oberstaufen has almost become a sanctuary to Johann Schroth and his ‘kur.’

With the kur museum, weekly kur talks, free Schnapps-tasting nights, and restaurants with a kur -approved drinks list, there is no lack of outside reinforcement to convince the dieters that every growl of stomach and dream of pasta is worth it.

The night-life isn’t bad either. While most of the Don Juans at the bars sport white hair and dentures, there is just as much energy of anticipated romance as in Berlin on a Saturday night. After all, with their new svelte figures and uninhibited demeanour, single Schrothlers make for a fun night out on the town.

However, at the end of the day, the real measure of success is the number on the scale. And we were not disappointed. A week of wine, Schnapps, a few crackers and some broccoli had done its work: three kilos gone for Gina Hoff, two for the author and two for her friend, Anne O’Donnell.

Schrothlers who stay the entire three weeks often report a loss of more than eight kilos depending on their initial weight.

“After cruises, where you come back unable to fit into any of your clothes, this is a wonderful alternative,” said Gina. “Will I come back again? If my liver can take it, you bet I will.”