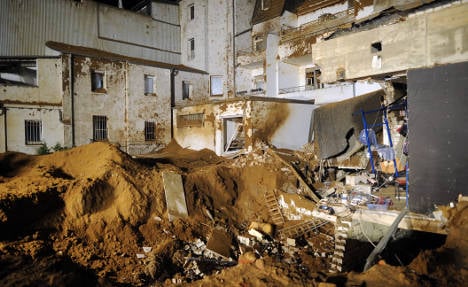 Construction workers in Viersen found the 250-kilo bomb on Monday at lunchtime – and experts from nearby Düsseldorf said they could not defuse the chemical detonator, but would have to blow it up.

The builders had moved the bomb quite a lot, Die Welt newspaper reported on Tuesday, allowing it to slip into a ditch. “We had to assume that the long detonator had been set off,” said Dieter Daenecke, the bomb disposal head.

Hundreds of people were evacuated from buildings within 500 metres from the site, while people were told not to be outside within a kilometre so they were not at risk of being hit by shrapnel.

The evacuation was complete by around 10:30 pm, the town council said in a statement, and the controlled explosion was carried out shortly after 11pm. By 2:30am on Tuesday, residents were allowed to return to their homes. Just one person had to spend the night in a hotel, the town said.

Many windows of nearby buildings were smashed by the explosion and two buildings backing onto the bomb site were so badly damaged they will have to be partially torn down.

An equally large but less dangerous bomb was found in Hamburg on Monday, pulled out of the water by a digger. Experts there were able to remove the detonator – after buildings in a 300-metre radius had been evacuated.

Another WWII bomb which was set off in central Munich caused significant damage and required 2,500 people to be moved from their homes for the night last month.