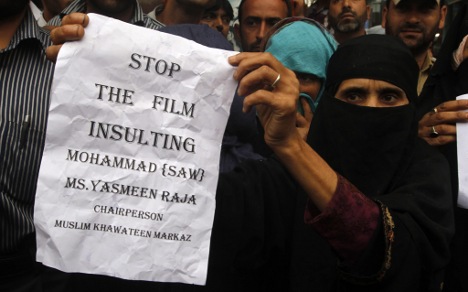 Pro-Deutschland said they were planning to screen the film in a Berlin cinema in November.

But politicians from the centre-left Social Democratic Party (SPD) and the Green Party have spoken out against banning the film produced in the US, with excerpts spread on the internet.

“A simple foreign policy deference to other countries is not enough to limit basic rights,” SPD domestic policy spokesman Dieter Wiefelspütz told the taz newspaper. He said bans should only be the last resort.

Green Party whip Volker Beck said that he saw no legal justification for a ban. “Based on what I’ve seen, the film is tasteless idiocy, but without criminal content.”

Rainer Wendt, chairman of the German police union DPolG, warned against the consequences if Pro Deutschland were to carry out its plan.

“That could be very dangerous,” Wendt told the Ruhr Nachrichten newspaper. “There are very aggressive Islamists in Germany too. We have to expect that a small spark is enough to cause explosions in several places.”

But he added he saw no way that the police could prevent the film being shown. “We are a free country with freedom of speech,” said Wendt. “As long as there are no criminal offences in the film, it can’t really be stopped.”

Chancellor Angela Merkel said on Monday she “could imagine good reasons” to prevent Pro Deutschland from showing the film, suggesting that the screening could be stopped if it endangered public safety.

The head of the German Catholic Church, Archbishop Robert Zollitsch, also condemned the film, calling it an “unacceptable and pointless provocation that endangers peace and Christians around the world.”

Meanwhile, Lebanese Shiite militia Hezbollah called for more protests against the film on Monday. “The whole world needs to see your anger on your faces, in your fists and your shouts,” Hezbollah chief Hassan Nasrallah told Muslims in a TV address, in which he called the film “the worst ever attack on Islam.”

The amateurishly-executed film, entitled “Innocence of Muslims,” slanders the Prophet Mohammed and has caused attacks on western embassies across the Muslim world. It was reportedly made by 55-year-old Nakoula Basseley Nakoula, a convicted US bank fraudster with links to Coptic Christianity.