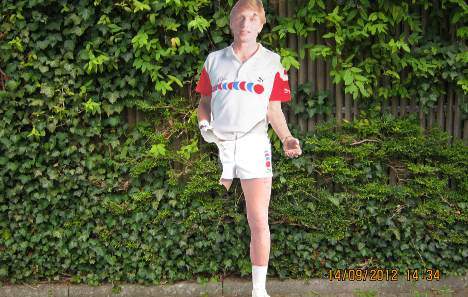 “He wouldn’t have won Wimbledon like that,” quipped police spokesman Bernd Triphahn, speaking to The Local.

He said the cut-out was obviously old, dating back to the tennis legend’s glory days. “Someone must have had it in their cellar for ages,” said Triphahn.

It was left on the B76 road between Kiel and Plön in northern Germany at around midnight last Tuesday.

“Cars travel along this road, which is not lit, at about 100 kmph, it was dangerous – one car was seen swerving to avoid it. In the dark the figure would have looked like a person.”

He said fingerprints had been taken from the figure and were being examined by colleagues.

Charges will be pressed, he said, and anyone convicted of dangerously interfering with traffic could expect a fine.