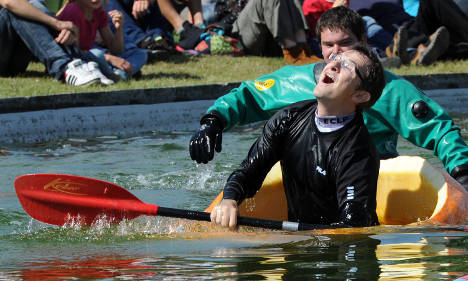 Forty giant pumpkins, weighing up to 350 kilos each, had been carefully hollowed out for the race in Ludwigsburg in Swabia, and the competitors hopped in with paddles – followed by safety marshals in dry suits.

The regatta, held this year for the ninth time on the lake in front of Ludwigsburg palace, is only over a 60 metre stretch, but the pumpkins could travel much further, said organiser Stefan Hinner.

“The pumpkins don’t break up so quickly. You could paddle with them into next week,” he said.

But there are a couple of things pumpkin paddlers should consider – they should try to scoop out around their own body weight of pumpkin insides – and remember that the vegetables are not properly round.

“The biggest challenge is that the pumpkins do not grow evenly,” said Hinner. “And big does not always mean best. It depends on the paddler.”

The winner this year was Patrick Reyinger from the village of Bietigheim-Bissingen, who clocked a time of 52.9 seconds.

After the race, which left many competitors damp, a fortifying bowl of pumpkin soup was felt to be a fitting end to the afternoon.