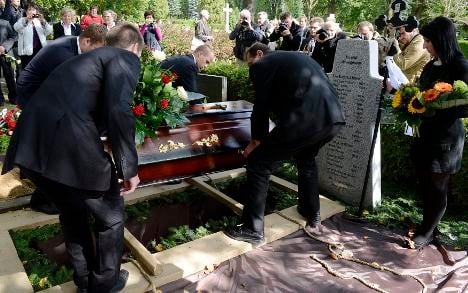 Saturday’s private burial was held in the central Czech city of Jihlava, 130 kilometres southeast of Prague.

On the night of May 19-20, 1945, a commando of Czechoslovak “revolutionary guards” killed a group of 13 German farmers in the nearby village of Dobronin.

The two EU nations have been torn over the post-war expulsion of Sudeten Germans from the border regions of the former Czechoslovakia, seen by Germany as discrimination – and as justified retaliation by Czechs and Slovaks.

The victims of the massacre were thrown into a common grave, where they remained for 67 years until an official probe inspired by local journalist Miroslav Mares.

“There’s no tangible proof the victims committed any offence against the Czechs,” Mares said recently.

“History isn’t made up solely of events we can be proud of,” he added.

Only one victim was not identified by relatives and will be buried later, the organisers of Saturday’s ceremony said.

With a population of around 2,000, Dobronin was predominantly ethnic German before 1945 like dozens of towns in the borderland Sudeten regions, which had been annexed by Germany in September 1938.

Having been invaded by Nazi Germany in March 1939, Czechoslovakia showed no mercy to three million Sudeten Germans after the war, expropriating their property and expelling them under decrees signed by then-president Edvard Benes.

The bodies of the 13 slain farmers were discovered in August 2010, sparking a new debate on Czech-German relations.

Opinion among Czechs is divided on how to make amends; with some arguing the 1945 act of vengeance was a justified act of retaliation for war crimes committed by the Nazis, while others believe the victims deserve justice.

“We can’t do anything for them now, just let it be,” said a pensioner who refused to give his name.

“It’s very difficult to be certain about what happened after the war. The revolutionary guards included communists as well as people who wanted to settle their personal accounts,” Dobronin mayor Ivan Sehnal said.

“The situation will calm down after the burial,” he added.

Czechoslovakia split peacefully into the Czech Republic and Slovakia in 1993, four years after the end of the communist system.

At the time, then freshly-elected president Vaclav Havel apologised to Sudeten Germans, sparking a wave of public disbelief.

“Vaclav Havel was 20 years ahead of everyone else. The moral power of a nation rests in that which we are able to admit,” said Mares.