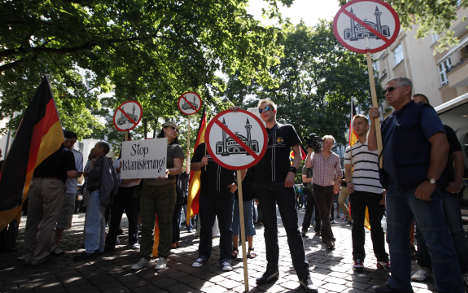 “For us, it’s a question of art and freedom of expression,” Manfred Rouhs, head of the small Pro Deutschland group told Der Spiegel magazine.

Interior Minister Hans-Peter Friedrich said he would use every legal means at his disposal to stop them.

“Such groups and organisations only want to provoke Germany’s Muslims,” he said, accusing them of recklessly pouring oil on the fire.

Pro Deutschland is known for its provocative demonstrations. Last month about 50 of its activists staged demonstrations outside three Berlin mosques, in action they said was aimed at Islamist extremists. This followed a previous demonstration in Cologne which successfully provoked extremist Salafist Muslims into violence against the police.

They brandished copies of cartoons of the Prophet Mohammed that sparked violent reactions across the world when they were first published in a Danish newspaper.

Indeed Der Spiegel said at least part of the reason the German embassy was targeted in the Sudanese capital Khartoum on Friday was because of the Pro Deutschland demonstrations.

The magazine said several Islamist groups in the city had met and talked about the decision of the Berlin administrative court to allow them to use Mohammed cartoons.

The Sudanese groups decided in advance to demonstrate in front of the German embassy, the magazine said, prompting warnings from the German federal police on Thursday that the building could become a target during potential riots.

The “Innocence of Muslims” film, which portrays the Prophet Mohammed in insulting terms, has sparked a wave of deadly anti-American protests since Tuesday during which mobs have attacked US missions, schools and businesses.