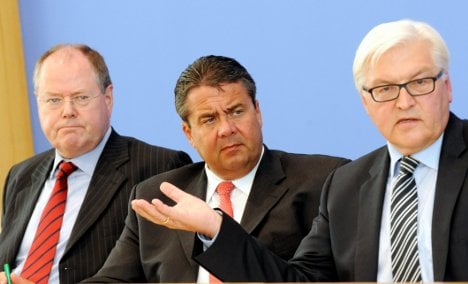 Frank-Walter Steinmeier, head of the SPD parliamentary party, said on Saturday, “We do not just want to be in government again from 2013, we want to shape this country, and not as the junior partner of a grand coalition.”

He told a meeting in Berlin the only coalition for after next autumn’s general election was an SPD-Green one, saying the current government of Merkel’s conservative Christian Democratic Union (CDU) and the business-friendly Free Democrats (FDP) were “talking the people into a coma every day.”

Referring to the series of hard-hitting and largely unpopular reforms known as Agenda 2010 implemented by SPD Shancellor Gerhard Schröder in 2002, he said, “Ten years ago the Social Democrats had to pull Germany up out of a position of weakness.” Now, with Germany in a strong situation, there is a chance to modernise the country, he said.

The current coalition, “does not know what to do with this chance. This is why Germany needs a new government. We are playing to win, not for a place on the podium.”

His rival for the SPD chancellor candidacy, former Finance Minister Peer Steinbrück, spoke in Haan in the Rhineland, where he wants to be a candidate, saying much the same thing, Die Welt newspaper said.

“The SPD is not standing for a place; no, it wants to win,” he said.

“Peer Steinbrück will never again be found in Ms Merkel’s cabinet,” he said. “That is the message, so there can be no misunderstanding.”

That he had worked with Merkel in the last grand coalition between 2005 and 2009, is something he wants to shake off – the SPD came off badly afterwards, getting just 23 percent of the vote in the 2009 election.

And Die Welt pointed out that at 65 years old, he has little to lose, while his rivals within the SPD, Steinmeier at 56, and Sigmar Gabriel at 53, might be under much more pressure to work within such a coalition to continue their political careers.

Yet a survey suggested on Friday that more than half the people would like to see a coalition between the two major parties.

The largest share – 45 percent – expected such a coalition, while only 14 percent expect an SPD-Green coalition, and nine percent said they thought the current coalition would be re-elected.