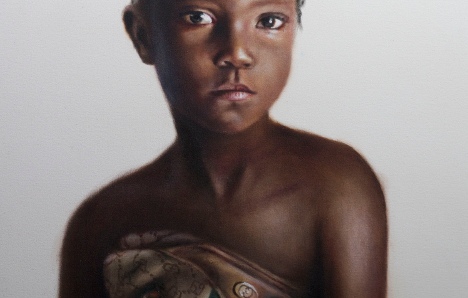 Andersson is limping and struggling with a heavy load – his portrait work has featured people with facial disfigurement, and now focuses on people from desperate circumstances clutching or wearing the baubles of the first world. They shock and challenge the viewer, and are steadily becoming wildly popular.

Yet although his subject matter does weigh heavily on him – he said going to Haiti this summer changed his life – Andersson’s limp was from a knee injury and the load he was carrying was actually a roll of paintings.

He was in Haiti in July, on a humanitarian mission with some friends distributing medicine. It was there that he met Nakaia, the little girl in his Brand For Life painting series.

Andersson painted her holding a vintage Gucci handbag. She is joined by “sweatshop worker” wearing an A & Fitch T-shirt, while a third picture shows a young boy holding a pistol and wearing a Louis Vuitton hat. Another shows a disfigured man wearing a Texaco hat, while a fifth has not brand visible, but is called “Apple worker”.

Follow the link for a selection of Andersson’s work

Andersson creates a clash of circumstance – the faces staring out of the pictures telling a story of poverty and hardship unimaginable to those watching, yet the subjects wear or hold instantly recognisable first world fashion items.

“What I am trying to do is to shift our perspective. I am not condemning western culture or brands but I want to take a step back. How important is my bag or shirt?” he said.

“If you take a step back and think about what the cost is to other people – if you think about how Apple products are made and if you knew the cost we would, for example, see Steve Jobs differently.

The sweatshop worker and the boy were composites of faces he had seen on the internet, admitted Andersson.

Does this matter? The 26-year-old’s last project Stolen Faces, was a series of portraits of people with various disfigurements, from accidents, attacks, tattoos, plastic surgery, and plain bad luck. These were all paintings of specific individuals, with the idea being to give a visual voice to people who are usually marginalised.

The Brand For Life series is not as literal, yet Andersson is earnest in his desire to show the collision of the material poverty of his subjects and the suddenly ridiculous objects he paints them with.

His work can be seen this week at the De Freo Gallery on August­straße 85, Berlin, until September 30.

Berlin Art Week runs until September 16 with exhibitions at galleries across the city.