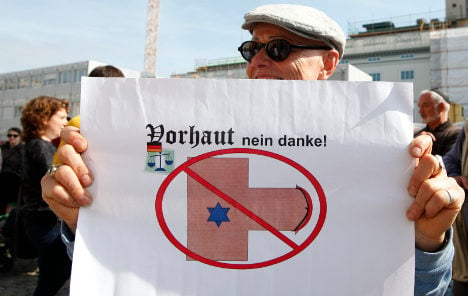 “The ‘yes’ to circumcision must be guaranteed in law,” demanded Lala Süßkind, former chairwoman of the Berlin Jewish community organization at the protest, which police said was attended by around 300 people.

Several Muslims and Christians joined the mainly Jewish demo, which took place under the motto “For religious freedom, against criminalization and authoritarianism.” The event was the latest episode in the ongoing row sparked by a Cologne court ruling that classified circumcision as bodily harm.

Süßkind said it was unacceptable “that incompetent and intolerant people are always having their say.” She added that the ritual was an important part of Jewish and Muslim identities, was medically accepted all over the world and had even been recommended by the World Health Organization.

German Foreign Minister Guido Westerwelle also weighed into the debate, warning that it was being misunderstood abroad. “It is simply unimaginable that Jewish families in Germany will no longer be able to circumcise their boys,” he said.

Kenan Kolat, chairman of the German Turkish community organization, said at the protest that “no-one will be able to stop the circumcision in Germany.”

Last Thursday, German Justice Minister Sabine Leutheusser-Schnarrenberger promised, “The legal uncertainty would be removed by federal law as quickly as possible.” Wolfgang Thierse, vice-president of the German parliament, also pledged to do everything his office allowed to ensure a law that safeguards religious circumcision.

Meanwhile, Berlin state’s Justice Minister Thomas Heilmann announced last week that religious circumcisions would remain unprosecuted, as long as parents give their written consent and can prove their religious affiliation.

But Wolfram Hartmann, president of Germany’s association of children’s and young people’s doctors, said its members would not take part in religious circumcisions. In an interview with regional broadcaster RBB Inforadio, he argued that a child’s right not to be physically violated outweighed the parents’ right to religious freedom.