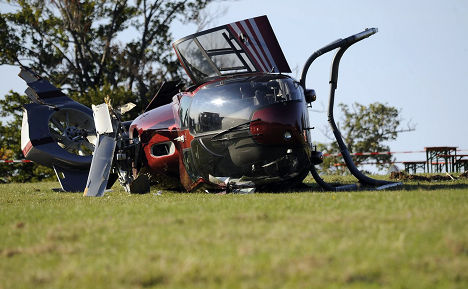 The helicopter snagged a blade in the ground as it was taking off in Metzingen, Baden-Württemberg. Parts of the machine went flying into the air, killing a 38-year-old onlooker and causing an estimated €2 million in damages.

Parts of the aircraft also injured a 58-year-old woman and a 47-year-old-man who were at the airfield. They were taken to hospital in a different helicopter. The pilot and co-pilot escaped with injuries.

The flight was part of an airshow to which there were 8,000 visitors, Bild daily said on Monday. A total of ten people in the audience were injured by flying detrius.

Just 45 minutes after that accident, a light aircraft crashed into a cornfield around 50 kilometres away in Backnang. The 67-year-old pilot and a 15-year-old girl were killed, while two other passengers, a 30-year-old man and a 44-year-old woman, were injured.

The accident happened towards the end of the Backnang airfield’s annual fair, meaning that many of the 3,000 visitors were already on their way home.

Backnang experienced drama at its fair last year too, when a historic plane crashed into a field and left the pilot injured.