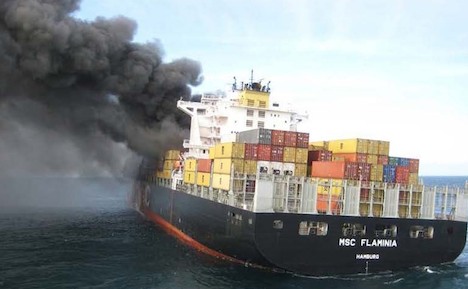 German maritime officials were due to board the MSC Flaminia “as soon as possible” to inspect the vessel and its cargo, said a statement from Germany’s Central Command for Maritime Emergencies.

The exact date of the ship’s arrival at the port of Wilhelmshaven in northern Germany would depend on the results of that inspection, it added.

An explosion on the German-flagged Flaminia on July 14 killed one member of the crew and left another missing. The remaining 23 crew members were evacuated. The blast caused a fire on board that was eventually put out.

The 289-metre ship was then left abandoned, unmanned and ablaze in the Atlantic.

For several weeks after the explosion and resulting fire, the ship was towed around international waters, looking for permission to dock until Germany agreed to take charge of it.

Both France and Britain had refused to let the ship dock for environmental reasons.

An inspection of the ship, which was carrying flammable fluids as part of its cargo, is key to refining towing plans and making safety assessments.

At the time of the explosion, the ship was carrying 2,876 containers, of which 151 held flammable cleaning fluids, German authorities have said.

There were also 1,247 tonnes of heavy crude oil and 680 tonnes of diesel on board when the accident occurred.

Flaminia was on its way from Charleston in the US state of South Carolina, to the German port of Bremenhaven, via Felixstowe in Britain and Antwerp in Belgium.