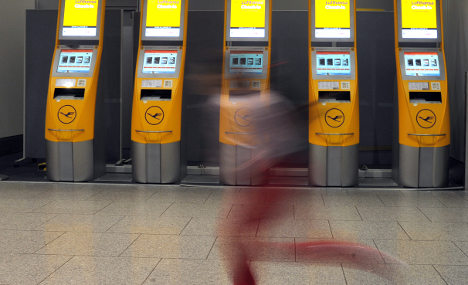 The union said on Friday morning it expected around 100,000 passengers to be affected as around 1,000 flights would be cancelled. The strike began at midnight.

Lufthansa was slightly more optimistic on Friday morning, a spokesman saying: “On average, there are 1,800 Lufthansa flights during a normal day, around half of these flights will take place.”

He said all German regions and all types of flights would be affected, including long-haul flights which in the past strikes have been the least disturbed by the stoppages.

The strike began at midnight (2200 GMT), but its effect overnight was minimal as there were no overnight flights scheduled.

The company had been expecting to cancel 1,200 flights, or two-thirds, as a result of Friday’s strike.

On Thursday the carrier had cancelled around 50 flights ahead of the planned walkout by cabin crew at six major airports as the long-running dispute escalated.

“There has been contact but no negotiations” with the cabin crew union UFO, the airline said.

As in previous walkouts, primarily domestic and European services were expected to be affected, but a number of intercontinental flights will be hit, such as New York-Frankfurt and Hong Kong-Munich, according to the carrier’s website.

Other much shorter walkouts of eight hours last week and earlier this week have grounded hundreds of flights and affected tens of thousands of passengers.

After the walkout, UFO “will give Lufthansa some time to review its intransigent attitude,” union representative Birgit Weinreich said shortly before the start of the strike.

The airline’s CEO Christoph Franz, interviewed by ZDF television, acknowledged that he had “not anticipated a movement of this scale” and described it as “disproportionate.”

According to its latest demands, the union – which represents some two-thirds of Lufthansa’s 18,000 cabin crew – is seeking a five-percent pay increase backdated to April after three years of wage freezes.

It is also opposed to the use of temporary cabin crew on Lufthansa flights.

“We’re prepared to go to mediation on the issue of pay hikes. But negotiations cannot include the use of temporary staff,” a Lufthansa spokesman told AFP.

The airline already faces headwinds because of rising fuel prices and fierce competition.

A 2009 strike by cabin crew cost Lufthansa tens of millions of euros.

In February, Frankfurt airport’s apron control staff – traffic controllers who guide aircraft on the tarmac – walked off the job over demands for higher pay.

Peter Oppitzhauser, an analyst at Credit Agricole Chevreux quoted by Dow Jones Newswires, said the first two days of walkouts had already knocked 2.0 percent off Lufthansa’s annual operating result, which is seen at around €500 million this year.