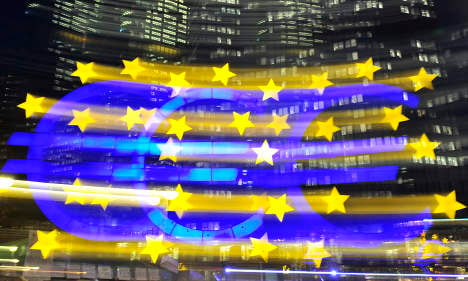 Echoing remarks issued by German and Spanish leaders almost simultaneously in Madrid, ECB president Mario Draghi said the central bank would buy unlimited volumes of bonds with maturity of up to three years.

He spoke after the bank kept its main interest rate unchanged at 0.75 percent and downgraded growth forecasts for the 17-nation bloc.

“We will do whatever it takes” to keep the eurozone together, Draghi said, stressing that “unfounded fears are just what they are, unfounded.”

Spanish Prime Minister Mariano Rajoy, who hosted German Chancellor Angela Merkel for talks, said that Madrid and Berlin would also do what it takes to “resolve the euro crisis”.

Merkel stressed that “we have to restore confidence in the euro as a whole.”

Draghi unveiled a new central bank instrument known as Outright Monetary Transactions (OMTs) in secondary markets for sovereign bonds, but stressed that governments would also have to fulfill strict conditions.

The programme, which would replace a previous much-contested one called SMP, would cover sovereign bonds with maturities of up to three years, Draghi told a news conference here.

The bank has set no limit to the volume of bonds it will purchase under the new programme, he added.

“As we said a month ago, we need to be in the position to safeguard the monetary policy transmission mechanism in all countries of the euro area.”

The OMTs “will enable us to address severe distortions in government bond markets which originate from, in particular, unfounded fears on the part of investors of the reversibility of the euro,” Draghi said.

At the same time, “governments must stand ready to activate the EFSF/ESM in the bond market when exceptional financial market circumstances and risks to financial stability exist,” an ECB statement explained.

It referred to two eurozone financial rescue packages that were expected to work in conjunction with the ECB by buying longer-term bonds, if necessary.

“The adherence of governments to their commitments and the fulfilment by the EFSF/ESM of their role are necessary conditions for our outright transactions to be conducted and to be effective,” the ECB said.

Draghi acknowledged that the decision to launch OMTs was not unanimous, with opposition in particular from German central bank governor Jens Weidmann widely known.

The central bank chief insisted that in launching the new programme, the ECB was acting “strictly within our mandate to maintain price stability over the medium term.”

It was acting “independently in determining monetary policy and the euro is irreversible,” he said.

Meanwhile, the bank also downgraded its eurozone growth forecasts to a contraction of 0.4 percent in 2012 followed by growth of 0.5 percent in 2013, a reduction from its previous call in June of minus 0.1 percent for this year and plus 1.0 percent next year.

The new ECB programme replaces its Securities Market Programme, launched in May 2010.

Via that programme, the ECB has accumulated €208.5 billion in bonds from Greece, Ireland, Portugal, Italy and Spain.

Berenberg Bank economist Holger Schmieding commented that “after one year in which the ECB allowed turmoil in sovereign bond markets to obstruct the transmission of its monetary policy, the ECB is now addressing the core issue in the Eurozone crisis.

“By turning itself into an ‘effective backstop’ for countries that meet tight conditions on fiscal repair and pro-growth reforms, the ECB signalled today more clearly and in much more detail than before that it will not let any solvent euro member go bust.”