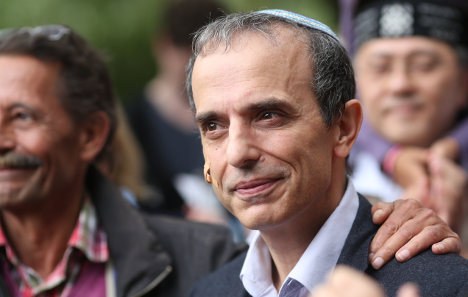 The protest against anti-Semitism and racism took place near the scene of the attack on 53-year-old Daniel Alter in the western district of Schöneberg on Tuesday.

Alter, who attended the demonstration, thanked the crowd for the “wonderful outpouring of moral support” for his family.

“My cheekbone was broken but these guys did not break my will to stand up for dialogue between religions,” he said.

Police have launched an investigation but made no arrests in the case.

A Berlin city government official of Turkish origin, Dilek Kolat, called for more vigilance in the face of what she called a rising tide of hate crimes and for a firm response to anti-Semitism from Muslim groups.

“We must act where we see racism and xenophobia,” she said to applause from the crowd.

During the attack, one youth smashed Alter in the face several times after asking him if he was Jewish, apparently because he was wearing a traditional skullcap, police said.

The four assailants fled, but not before hurling death threats at his young daughter, according to police.

The attack comes against the backdrop of frequent altercations on German streets over the Israeli-Palestinian conflict and outrage in the Jewish community over a recent German court ruling against religious circumcision.

But the German Muslim coordination council (KRM) has also reacted against calls by the Central Council of Jews in Germany that it should do more to combat anti-Semitism.

“Anti-Semitism does not go together with Islam,” he said, and condemned the attack on Alter. “Such an attack is an attack on us all. Society must do something against it.”

On Friday, Dieter Graumann, president of the Central Council of Jews in Germany, had told the same paper, “I would be pleased if (Muslim) associations would finally deal decisively with anti-Semitism in their own ranks.”

“Words and sympathy are nice and meant honestly, but deeds would also count,” he said.