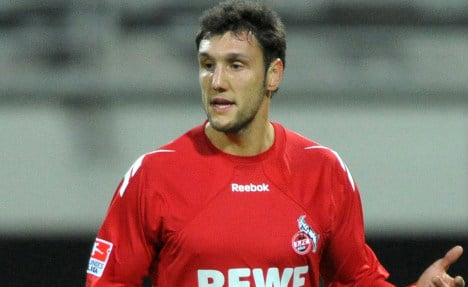 Club coach Holger Stanislawski said the club had agreed to the 23-year-old’s request to terminate his contract on Friday after he was confronted outside his flat.

“A group of people ambushed him outside his private residence this week, roughed him up and really threatened him,” said Cologne coach Stanislawski. “That is just not acceptable and can’t ever be so.”

“They left a note on his car and made it clear they wanted to really hurt him. These people have crossed the line.”

Stanislawski said the player had felt unable to play any more for the club, being terrified of making a bad pass for reasons that went beyond football.

Fans of the club who felt Pezzoni was not good enough to play for it had already started a Facebook group “Kevin Pezzoni must go.” The aim, said the founders, was to gather 50,000 signatures. “Out with the rat,” said one comment.

The group was started after a poor performance for Pezzoni last weekend at Erzgebirge Aue, where Cologne lost 2-0 and the player was substituted after 34 minutes

Pezzoni joined Cologne in 2008 from English side Blackburn Rovers, and had good reason to think fans might follow up their threat. In February, during the city’s carnival celebrations, one disgruntled fan broke the player’s nose.

League president Reinhard Rauball condemned the fans’ behaviour in newspaper Welt am Sonntag. “This is not acceptable under any circumstances. It must be clear to everyone that, when things reach a certain level, this cannot be tolerated,” he said.

The club, which was relegated from the top flight of German football in the summer, said at the time that it stood by the player. But efforts to mediate between Pezzoni and the angry supporters have been unsuccessful.

Pezzoni wrote on his Facebook page on Saturday that he was “delighted” by the understanding that had greeted his decision. The player said he was looking forward to new sporting challenges.

Cologne lost 1-0 at home to Energie Cottbus on Friday, their third defeat in four games. Pezzoni did not play in that match.