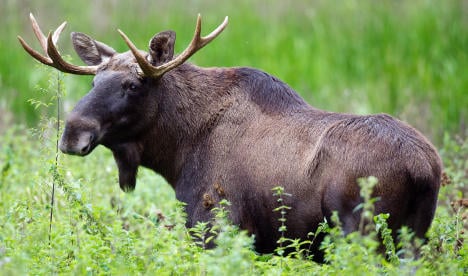 What the elk? Photo: DPA

The animal was hit first by a car, and survived that collision – only to be hit and killed by the truck. One driver was hurt during the incident and the motorway was closed temporarily.

An unexpected road encounter with the more common German fauna such as wild boar can be shocking enough – but a moose is likely to leave even more of an impression. They can be up to three metres long, and weigh as much as 800 kilos.

Police in the state of Brandenburg said they were unsure of where the moose had come from, but suspected it had wandered across the border from Poland.

“At the first the people involved thought it was a deer,” a police spokesman said.

While traffic accidents involving such animals are far more commonplace in Nordic countries, they are not completely unknown in Brandenburg. In 2000, a moose was killed in a collision with a bus in the Spree Forest.

Moose are spotted increasingly often in Brandenburg – with some 70 to 100 sightings reported since 1990, mostly from hunters along the border with Poland.

“They were not so common here as they were in Poland or even further east but they still came across,” said forest engineer Jan Engel. “They were even hunted in the times of the former East Germany.”

On a positive note regarding the increased sightings, Engel added: “It is a very strange, wonderful thing to see. It feels as though we are in the wilderness of Scandinavia.”