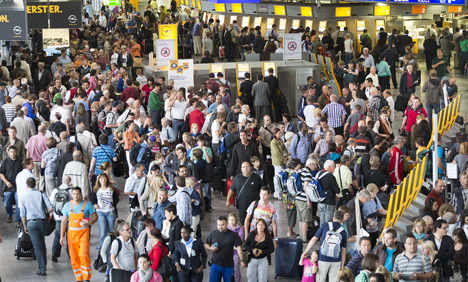 Nearly 200 flights were cancelled and it was estimated that around 26,000 passengers were affected.

Crew union UFO said the eight-hour strike had been a success, and that it would consider on Saturday what steps to take to increase the pressure on Lufthansa.

They are fighting for a five percent wage increase backdated to January, and oppose the use of temporary cabin staff. Lufthansa’s last offer was to increase their pay by around 3.5 percent.

Around 1,000 Lufthansa stewards and stewardesses refused to work between 5am and 1pm, forcing the airline to cancel most of the 360 flights scheduled to leave Frankfurt during that period. Initially only short- and medium-haul flights were affected, but later on, flights due to arrive from the USA were also affected.

The number of planes on the ground meant that other airlines were prevented from landing as there simply was not enough space.

The disruption at other major German airports, such as Munich, Berlin and Hamburg, was limited, a Lufthansa spokesman said.

“We can’t completely avoid it, because planes coming from Frankfurt also serve these airports,” he added.

UFO head Nicoley Baublies told ARD public television that “the chaos should extend into the afternoon” as the effects of the strike ripple on. And he said he could not rule out further strike action.

“That depends on the behaviour of Lufthansa… We are ready to act at any moment, anywhere in Germany, by announcing our action six hours in advance,” he said.

Unions had held off from strike action while last-ditch wage negotiations were still underway, but with no breakthrough in the deadlocked talks overnight Monday, UFO declared the negotiations had failed and called for immediate walkouts.

A strike by cabin crew at the beginning of 2009 cost Lufthansa tens of millions of euros.

And it is not the first time this year that Lufthansa has felt the pinch from industrial action. In February, the apron control staff at Frankfurt airport walked off the job over demands for higher pay.

Management nevertheless appears willing to risk all-out confrontation. Lufthansa embarked on a cost-cutting programme at the beginning of the year with the aim of boosting its operating profit by €1.5 billion by 2014.