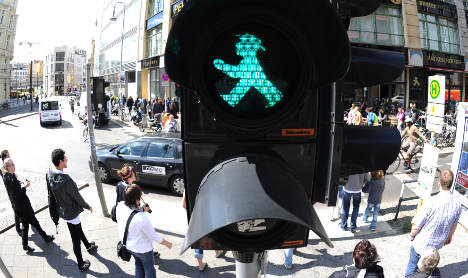 Experts at Friends of the Earth Germany (BUND) are fed up with the traffic light system in the capital and have admonished the city government for failing to get it right despite numerous attempts, local paper Tagesspiegel reported.

Waiting for up to four minutes for the green is now the norm for people in parts of the city, who when they eventually begin striding to the other side of a wide road, and frequently find themselves stranded on the little island in the middle.

That is, of course, if they manage to avoid cars turning left into the crossing – something tourists often fail to realise is allowed in Germany.

The combination of long waiting times, being crammed onto a tiny, risen patch of concrete in between zooming cars and running over the road all make pedestrian life dangerous in Berlin, Martin Schlegel from BUND told the Tagesspiegel on Tuesday.

Schlegel can list lots of places in the city which are particularly risky for people on foot, some where the green man flashes for less than three seconds, forcing pedestrians into a sprint to the other side.

It is possible to get over the road in the three seconds, but only if a person starts crossing as soon as the green man pops up – something which requires the reaction time of a professional 100-metre sprinter, the paper said.

The Berlin government has several plans to improve pedestrian crossings – such as making the green man and red men blink before they illuminate properly to give people wanting to cross forewarning, a system which is set to be installed across the city in November.

While transport authorities think that this will make people feel safer crossing the road, the people at BUND are less than impressed. And they weren’t pleased with a separate suggestion of having a countdown timer showing how much time is left before the lights change.

The group firmly feels that the only way to improve pedestrian safety is for the government to invest money into expanding the islands in the centre of large roads.

And while waiting to cross a road is unavoidable, giving people more space, and a safer space, is necessary.

“It does make more sense to let traffic continue along a busy road without stopping to let two pedestrians cross,” said Schlegel. On narrow roads especially, it was far more environmentally friendly to keep the traffic moving.

Making people wait a while to cross over was justifiable when it meant preventing clouds of pollution from stationary vehicles build up, he added.