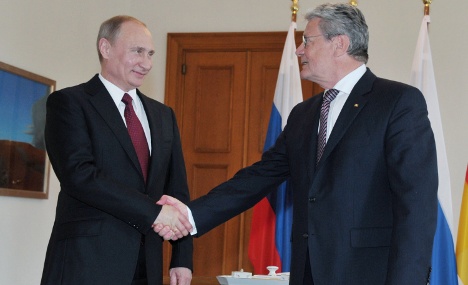 Since his appointment in March, Gauck has managed to keep his contact with Putin to a minimum.

He received the Russian leader at his official residence in Berlin at the end of May when Putin was visiting Germany after becoming president again, Der Spiegel magazine reported on Wednesday.

But the visit was not hugely friendly, the magazine said, and Gauck addressed Russian deficiencies in the rule of law when speaking with Putin, something the Russian leader was less than enthusiastic about.

Since then the pair have not met, despite plans for Gauck to visit Moscow in June to open the “Germany Year” of culture alongside Putin. He did not go in the end.

Gauck is hugely popular amongst Germans due to his perceived high political and social principles, his work in the pro-democracy movement in the GDR, and his integrity and determination in opening the Stasi files to the public in the 1990s.

He and Putin, an authoritarian former KGB agent who was stationed in Dresden during much of the 1980s, and has arguably overseen anti-democratic developments as Russian leader, certainly clash politically.

But, Der Spiegel said, Gauck’s office is aware of the political importance of maintaining functioning relations with Russia, and at some point he will have to go there.

When examined by Green politicians before being appointed president, Gauck was asked how he would deal with meeting foreign representatives like Putin. “That is the worst question you could ask me,” he replied, according to the magazine.

Gauck is now due to open the huge exhibition “Russians and Germans. 1,000 Years of Art, History and Culture” in Berlin at the start of October, his spokesman said. The visiting exhibition is the largest and most expensive one of Moscow’s “Germany Year”, displayed in the former Lenin Museum in the Russian capital.

And although opening the exhibition cannot replace a trip to Moscow, Der Spiegel called it a “pretty diplomatic trick to win time – and avoid Putin.”

There is even some evidence to suggest that Gauck’s absence from the Moscow opening of the “Germany Year” was down to Putin, who is said to have wanted Chancellor Angela Merkel to go instead of Gauck.

The German president’s people however, told the magazine that they had chosen a date for him to go to Moscow when Putin was due to be abroad – an option declined by the Russians.