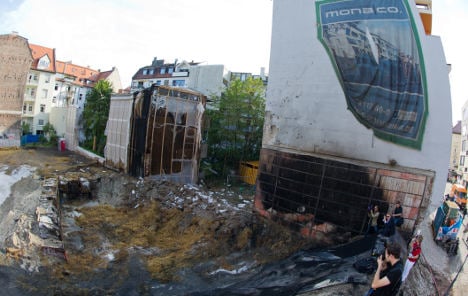 Although most of the more than 2,500 people living in the immediate vicinity were allowed to return home once the bomb had gone off and fires had been put out, some were on Wednesday still waiting for engineers to give them the go-ahead.

Straw and sand had been laid on top of the bomb to absorb as much of the blast as possible, but chunks of burning straw were thrown onto neighbouring buildings, setting several on fire. More than 100 fire fighters were deployed to put them out.

Munich mayor Christian Ude praised the way the detonation was handled. “I think the approach was absolutely free of errors. We could not have waited any longer.”

The Süddeutsche Zeitung on reported Wednesday that those residents whose homes were subject to structural assessment had been permitted to briefly re-enter their apartments with fire fighter escort to collect a few necessities.

Munich’s municipal utilities (SWM) has a special team on stand-by Wednesday in case water or power lines needed to be shut off during the day, according to the Müncher Merkur newspaper.

The bomb produced an Armageddon-like scene in the central Schwabing district, knocking out windows and creating a ball of fire over the city.

Older residents said it reminded them of the war.

“It’s like the whole city is being blown to bits,” an unnamed eyewitness told Bild.

Pictures of the fireball and its aftermath

The man who carried out the controlled blast, Günther Sobieralski, had handled more than 100 similar bombs, but that didn’t matter when it came time to carry out the blast.

“Every bomb is a new challenge“, the 65-year-old Sobieralski told the paper. “You have to treat each one like your first one. Routine is deadly.”

No injuries were reported after the blast, which happened at just before 10 pm on Tuesday.

Thousands of people had already been evacuated from their homes, and the city halted bus and tram services after it became clear experts could not simply defuse the bomb.

Munich bomb disposal officer Diethard Posorski and his colleagues had first assumed it was a ‘normal’ bomb – which although dangerous, can be handled with care.

However on Monday it became clear that the 250-kilo bomb was not the normal kind.

“That is a chemical delayed-action detonator. I am not defusing that, I’m not suicidal,” he told the Münchner Merkur on Monday night.

In 2010 three people died in Göttingen trying to defuse exactly the same kind of bomb, which exploded when they lifted it up.