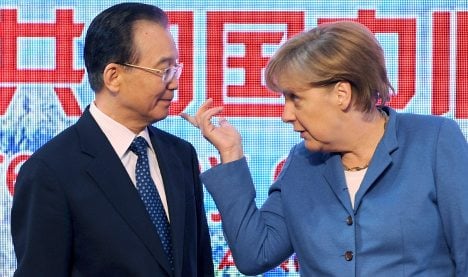 Merkel is expected to arrive on Thursday with nine ministers and a contingent of elite business representatives for talks with Premier Wen Jiabao and a joint cabinet meeting.

Analysts say Beijing considers Germany a key player in tackling the eurozone debt crisis, and Merkel is increasingly viewed as the gatekeeper for the rest of Europe, Hans Kundnani of the think-tank European Council on Foreign Relations, told AFP.

“China is increasingly looking to her for answers,” Kundnani said.

Europeans have expressed hope that China could deploy some of its huge foreign currency reserves to invest in EU bailout funds, although at present there is little sign of this happening.

Germany and China will also be looking to strengthen their own economic ties.

Germany is China’s top trade partner in the EU – nearly half of all European exports to China come from Germany. Meanwhile, Germany buys nearly a quarter of all China’s EU imports.

Gu Junli, an expert in Germany at the government-backed Chinese Academy of Social Sciences in Beijing, said the focus of Merkel’s visit would be at least as much on bilateral economic cooperation as on Europe’s sovereign debt crisis.

“Germany’s technology has a dominant position, but it needs a market and China is a big market,” said Gu, citing energy, environmental protection and manufacturing as possible areas of cooperation.

Merkel’s spokesman Steffen Seibert told reporters on Monday the chancellor would raise the issue of press freedom with Wen amid complaints of a “deteriorating situation” for German journalists in China.

On Wednesday, Der Spiegel reported that two young Tibetans died after setting themselves on fire in southwest China to protest the Chinese government.

An unnamed German official confirmed to AFP that “There is a very trusting relation between the chancellor and Premier Wen, which means that topics like this can be discussed.” However, the official, who requested anonymity, it did “not mean that this will be discussed in detail publicly afterwards.”