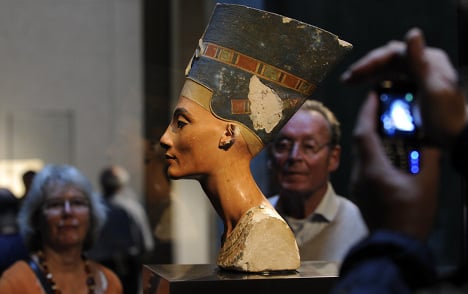 The museum said it would open the exhibition, “In the Light of Amarna: 100 Years of the Find of Nefertiti,” on December 6, the same day in 1912 that the bust was unearthed by German archaeologist Ludwig Borchard in the ancient city of Akhenaton.

Nefertiti, renowned as one of history’s great beauties, was the wife of Akhenaton, and remembered for having converted his kingdom to monotheism with the worship of one sun god, Aton. His bust, which was found smashed, will also be on display after being reassembled.

Borchardt and his team excavated up to 7,000 archaeological objects in Akhenaton, about 5,500 of which made their way to Berlin. Many of these have never been on display before, but around 600 have been restored and will be unveiled in December as part of the spectacle.

“The exhibition focuses on never-before-seen discoveries from the collections of the Berlin museum, supplemented by loans from other museums abroad,” it said, including the Metropolitan Museum of Art in New York, the Louvre in Paris and London’s British Museum.

But the exhibit is not without its critics. Nefertiti is one of the five major artefacts on display abroad that Egypt wants returned. But Germany says the bust was bought legally by the Prussian state, and that the purchase can be proven with documents.

The exhibit will run until April 13 on the German capital’s Museum Island. Tickets are on sale now.