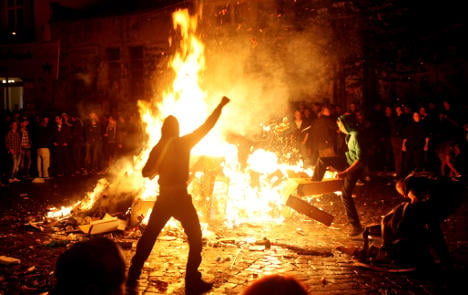 The 29-year-old was attacked from behind and stabbed four times, an activist from the squatted theatre-cum-culture centre Rote Flora told the Hamburger Morgenpost newspaper.

The annual street festival in the Schanzen quarter of the northern city is usually followed by violence. Much like the May Day parties in Berlin, there is a street festival with a political theme – yet riots often start after dark.

There has been criticism of heavy handed policing in the past, while locals involved in the festival have become increasingly annoyed by the appearance of “tourist hooligans” who show up each year to provoke violence.

This weekend up to 10,000 visitors milled around the area which was filled with a flea market, music, and food and drink stalls.

Even after dark on Saturday night the situation remained relatively calm, until a group of around 150 anarchists started a fire in front of the Rote Flora left-wing cultural centre and held up signs reading, “We don’t need the police”.

When some set off fireworks they were shouted at by locals yelling, “Stop it you idiots, we don’t want a riot here,” the newspaper reported.

Around six people were arrested for throwing bottles at the police, but the 1,600 or so officers refrained from intervening – and residents including those involved in Rote Flora, tried instead to put out the fire with buckets of water.

It was then that the man was attacked with a knife. “He stabbed him in the back four times,” said a Rote Flora activist who had tried to help the man. Others who tried to clear a way through the crowd for the ambulance were also attacked by the hooligans.

It was only after a group of around 40 people tried to break in the door to a bank that the police stepped in and used water cannon to drive them away.

Authorities had hoped for less violence fest this year, after a reduction last year. The Schanzenfest itself is always peaceful – but violence and confrontations with the police usually start after dark.

Police had officially declared the area a danger zone in advance – meaning that they can check people’s identification and search their belongings without reason, issue orders for people to leave the area and stop them from returning.

The stabbed man was on Monday said to be in a serious but not life-threatening condition.