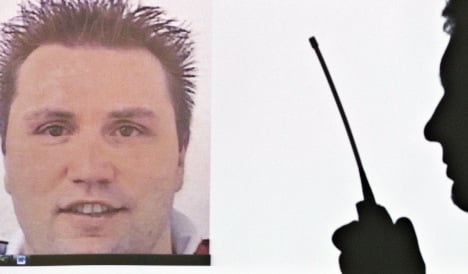 A picture used by police to search for the escaped criminal. Photo: DPA

The 36-year-old man, convicted of rape, grievous bodily harm and blackmail, was due to serve another 12 years in Burg prison, Saxony Anhalt, but escaped on August 14 while visiting his six-year-old son.

He left the door of the boy’s mother’s flat locked behind him when he made his move, leaving the two prison officers accompanying him unable to give chase straight away.

They will now be disciplined because several women and their children were present at the flat in Aschersleben in the Harz region while the prisoner was there seeing his son.

The man was captured again on Friday in Berlin – and a friend who had helped him escape by giving him a car to use, was also arrested.

He was found in the Marzahn area of the capital at the woman’s flat. She had no idea of the man’s past, nor that he was on the run when he showed up at her door, said Detlef Golz, head of the police squad in the case.

The 15-strong special commando team which had followed the man to her home had to wait outside rather than raiding it, due to the children being inside.

When he left and drove off in the car, they realised he had dyed his hair in an attempt to disguise himself. The police overpowered him in a car park.

“I didn’t think you’d find me so quickly,” he told the officers, and offered no resistance said Golz.