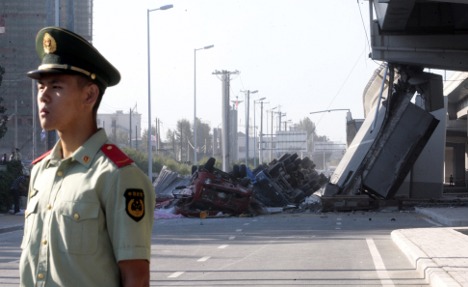 Merkel will hold talks with Chinese Premier Wen Jiabao during a two-day visit which begins on Thursday – her second trip to Beijing this year.

The journalists have written a letter to the German chancellor calling on her to discuss their “deteriorating situation”.

They complained Chinese authorities had been “willfully obstructing” their work by threatening to not renew working visas, intimidating Chinese assistants and pressuring interviewees into not talking to them.

“Long-term German correspondents who have been working in Beijing since the 1990s have been observing a deterioration of the situation, even in comparison to the conditions then,” said the letter, which is signed by 26 correspondents.

“Dear Chancellor Merkel, in the interest of good and fair reporting about China, we think it is necessary to discuss these issues at the highest governmental level.

“We just request the same working conditions that Chinese journalists enjoy… in Germany.”

China is ranked 174th out of 179 countries in the 2011-2012 World Press Freedom Index compiled by press freedom group Reporters Without Borders.

Germany has come under intense pressure to do more to put an end to the eurozone crisis, which is seen as a threat to the global economy and has hit China’s vast manufacturing industry.