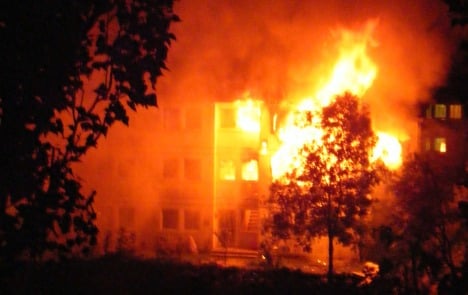 The images of asylum seekers jumping out of windows to save themselves from flames immediately raised memories of racist rioting near Rostock, when the accommodation of asylum seekers was set alight. The 20th anniversary of those riots are being marked this weekend.

Although the cause of the Stuttgart fire will be investigated over the coming days, initial assessments make no suggestion of foul play.

One person was in a critical condition, while the rest were suffering from smoke inhalation and burns, a police spokesman said.

Initial estimates suggest about 50 people were in the two-storey building in the Heumaden district when the fire broke out. Emergency teams were looking after the remaining residents while steps were being taken to find them somwhere else to stay.

The police spokesman said two men had jumped out of the window – one had used a sheet to abseil his way to safety.

Work to extinguish the blaze was finished by Saturday morning, although the building was so badly damaged it could collapse and cannot be entered.

The possibility that other victims may be inside the house has not been excluded.

The blaze started on the first floor of the accommodation and spread quickly to the second floor, the fire department said.

Firefighters remained at the scene on Saturday morning, with damping down operations on the building still underway.