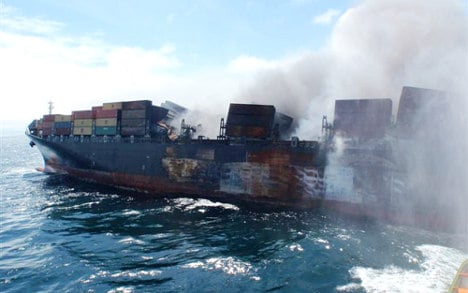 Mystery still surrounds the cause of the fire which broke out on the appropriately named ship in mid-July, as it was en route from Charleston, US, to Antwerp, Belgium.

One sailor was killed while another is still missing. The rest of the crew and two passengers were successfully rescued. The 289-metre vessel was abandoned unmanned and ablaze in the ocean for some time before salvage workers were able to get aboard.

It is currently being towed into the English Channel on its way to the island of Helgoland, before moving on to the Jade-Weser-Port at Wilhelmshaven on the German coast, the Süddeutsche Zeitung reported on Friday.

Both Britain and France refused to make room for the stricken ship because of the apparent environmental risks. Though all the known fires have been put out, no-one can be sure there are no fires inside the ship’s 2,876 containers.

A salvage crew from the port of Cuxhaven has agreed to take over the recovery work, but there is concern that the Flaminia is seriously damaged and might not make it all the way back to the port. It could present an environmental risk for the Wadden Sea, a stretch of intertidal coast that stretches from Denmark to the Netherlands. It is a protected area and a Unesco World Heritage site.

Experts have been called in from Britain, the Netherlands and France, and were hoping to board the ship on Friday. Once it is finally brought to the brand new Jade-Weser-Port, every container will have to be removed and inspected one by one.