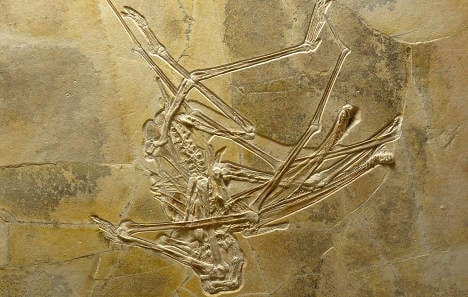 Thought to be around 155 million years old and with remnants of its last fish supper in its belly, scientists found the creature’s skeleton in Wattendorf, Bavaria last year. It is the only one of its kind ever found and the dinosaur world is excited about the still unnamed animal.

“It had very long arms and very long legs, almost like stilts which were probably an advantage when wading through the water,” he added.

And despite being only around the height of a raven when standing, the pterosaur had a wingspan of around 1.20 metres, director of the Bamberg museum of natural history Matthias Mäuser told The Local.

To top off its oddly-proportioned shape, the creature had a long flamingo-like beak packed with 400 long, blunt teeth, which Mäuser explained were used to filter “fish, little crabs and other bits of food from shallow rock pools while standing.”

Scientists inspecting the fossil even found remains of its last meal in its stomach – bits of fish – solidifying the theory that it lived near water.

“It did have wings, but that does not mean it was a bird,” said Mäuser, adding that the new pterosaur did not have feathers, but instead was covered in wiry bristles and was a flying reptile.

Little is known about Germany’s new Jurassic age curio, but after a year of rigorous investigations and research, Mäuser said that it may have died from an injury to its jaw, which showed signs of damage.

The Wattendorf limestone where the skeleton was found is a renowned hotspot for fossils. Scientists have unearthed more than 5,000 fossils of sharks, turtles, fish, snails and crocodiles there since excavation begun in 2004.

“It is a treasure trove of fossils,” said Mäuser. The new pterosaur is the oldest to have been found in the area, and Helmut Tischlinger, one of the scientists working on the project believes that links can be seen between the animal and much later giant pterosaurs – which had a wingspan up to ten metres.

The new pterosaur will be on display from Saturday in a special exhibition at the Bamberg natural history museum.