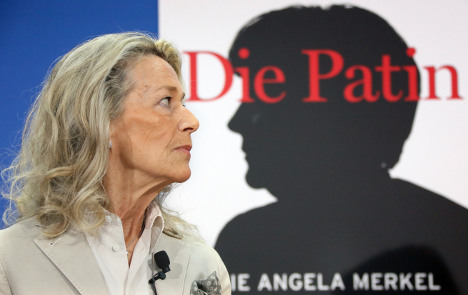 Gertrud Höhler called her book “The Godmother,” and made it absolutely clear she was not referring to the kind which waves a wand and grants wishes.

Launching the book in Berlin on Thursday, Höhler attacked Merkel for reducing the role of parliament, in particular in her management of the euro crisis and the move away from nuclear power.

“We have more and more state power and less and less parliamentary power,” she said of Merkel’s government. The circumvention of parliament was breaking laws, she alleged, arguing that Merkel was restricting freedoms by saying there was no alternative to the euro rescue.

Though Höhler claimed that her book’s title was not meant to demonise Merkel, she said that one of the features of organized crime was its “seeping interference in the legality of a community.”

Merkel was not a woman with a vision, said Höhler, rather, she had “a coolness, a neutrality of values, a lack of passion, which was foreign to many westerners.”

Höhler insists she has no personal feud with the chancellor, though she is firmly rooted in the Christian Democratic Union’s western German tradition, and was an advisor to Kohl, who Merkel replaced as party leader.

She said she did not want to create a legend around Merkel’s East German background, but also pointed out that Merkel “never says too much” about her life back then.

Yet Der Spiegel magazine suggested on Friday that Höhler was trying to pull together dissatisfaction with Merkel within the CDU, ahead of the next election.

She accused older men in the party of making fists in their pockets, but leaving them there as the “alpha wolf in sheep’s clothing from the gloomy eastern background” got rid of Kohl to clear a path for her own career, the magazine said.

“System M establishes a quiet variant of authoritarian power expansion, the like of which Germany has not yet known,” she writes in the book.

And she indirectly called for a mutiny against Merkel from within the party. She dedicated the book to “All those who still have their fists in their pockets,” the Berliner Zeitung newspaper said.

“Take the fists out of the pockets, and you will develop a justified wrath,” she told them.