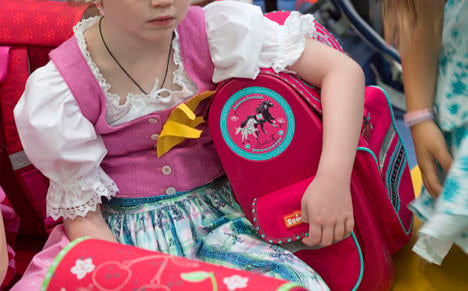 Just like their American and British counterparts, German girls are drowning in a sea of pink which clearly defines what they are supposed to want – and by definition what the boys are not allowed to desire.

The marketing of just about everything in an apartheid world for children, with girls in bright pink and boys in blue or darker colours, is clear to see in most toy shops.

The Kinder Surprise is just the latest wave to break – and is being tackled by Pinkstinks.

“We are calling for Ferrero which makes these products, to stop marketing them in this way. Our girls are being flooded with pink, with these images which sexualize and pigeonhole them,” Stevie Schmiedel, founder of Pinkstinks Germany told The Local.

“The problem is that we are seeing a huge rise in body image problems among children. More than half of girls aged between 12 and 17 hate their bodies according to a study by Dr Sommer, the sex expert at Bravo magazine.”

The “just for girls” eggs contain plastic figures from the “Winx Club” television series – fairies with long legs, stripper shoes and tiny bits of clothing, who pose like models. Those four-year-olds not lucky enough to get a stripper fairy in their eggs can made do with little plastic rings or a bracelet.

Ferrero’s sparkly pink website says market research showed that “girls these days no longer allow themselves to be put in a pigeonhole. Pink and ponies is just as important to them as football and women power.”

Schmiedel has launched a petition online to try to pressure Ferrero to change its marketing strategy and drop the pink eggs aimed at girls.

But the problem is not just with Kinder surprise – Schmiedel said she is constantly confronted with huge posters bearing images which reinforce the images of sexualized, helpless women, and a pink world of segregation for girls.

“Even an ARD advert recently showed a stone-age man watching sport and a woman trying to tempt him away from it by virtue of her bikini which looked like two footballs. School children walk past that every day. I don’t want my children to see it,” she said.

The irony with which such adverts are justified, passes young children by, she said. All they get are the endlessly repeated images of women being defined by their bodies.

Schmiedel started the German arm of the Pinkstinks campaign earlier this year, after getting to know the British initiators of the campaign – which pushes for less rigid gender stereotypes in marketing aimed at children.

They launched a high-profile campaign against Lego after it launched a range for girls featuring doll-like rather than plain yellow figures, as well as beauty parlours and cafes. And Pinkstinks were instrumental in persuading London’s most famous toy shop Hamleys to rearrange its toy department which had been split between pink and boys.

“Companies want to make everything in pink for girls and blue for boys – it means they can sell things twice over,” said Schmiedel. “There are even blue and pink sit-upon cars.

“It is great marketing, and the children lap it up. Even parents often think it is a phase that their children go through, but it is damaging.”

Next stop: make-up for children

The next campaign, which Schmiedel is also taking part in, is called “Slap on the face of childhood” and aims to raise awareness – and rejection – of the looming cosmetics market for children. Brands such as Disney Princess, Hello Kitty and Prinzessin Lillifee are the ones bringing make-up for children into toy shops, she said.

“The big question is how can companies make money without creating such role models? They need to realize that they can offer different role models that are empowering, like Heidi for example.

“We have the responsibility to tell people – it’s not healthy, it’s harming children. People are slowly realizing that something is not right and the more people realize that, the more they will be able to influence the industry.”