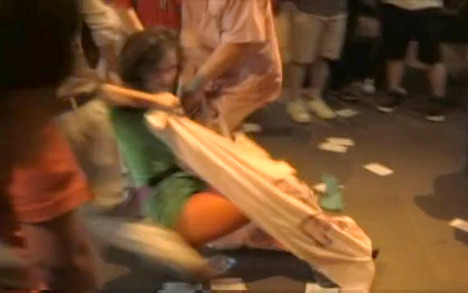 The two men, aged 23 and 25, and a 20-year-old woman were dressed as the all-female punk band Pussy Riot, three of whom were sentenced to two years in prison in Russia last week for staging a similar demonstration inside a cathedral in Moscow in February.

“The peace of Cologne Cathedral was disturbed – we can’t and won’t accept this,” said the cathedral’s dean Robert Kleine in the Frankfurter Rundschau newspaper.

The three unnamed activists could now be prosecuted for breach of the peace and disrupting the free practice of religion. The latter carries a maximum prison sentence of up to three years, or a fine.

In a similar case in 2006, a Berlin man was sentenced to nine months in prison after he disrupted a service on German Unity Day by shouting and throwing leaflets.

The Cologne trio’s protest lasted less than a minute before cathedral wardens dragged them outside. Bishop Heiner Koch, who had just finished giving his sermon, said afterwards that he would include the demonstrators’ cause, Pussy Riot and the people of Russia in the service prayer, the newspaper reported.

Several other protests were held across Germany in solidarity with Pussy Riot last weekend after their prison sentence was announced in Russia.