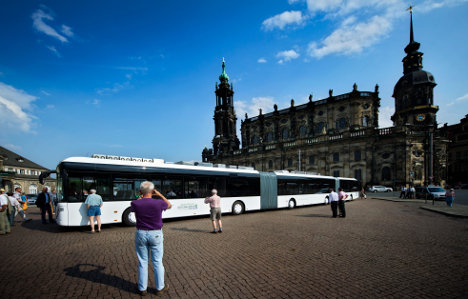 It’s 30 metres long, has two waists, and can carry 256 passengers along busy urban streets anywhere. Not only that, the Autotram can be driven by any bus driver – no special license needed.

Designed and built by the Fraunhofer Institute for Transportation and Infrastructure Systems IVI in Dresden and the Technical University Dresden, the bus is currently undergoing tests in special facilities outside the city, but is set to make its debut in Dresden traffic – on normal routes with real passengers – in October.

“There is a lot of know-how invested in it – the computer is driven by a pretty clever steering algorithm,” Matthias Klingner, the institute’s director told The Local. The Autotram comes with a special steering system on its four regulated axles, which ensures that the back sections of the bendy-bus precisely follow the front section.

“Thanks to this patented multiple axis steering, the vehicle can manoeuvre just as easily as a 12-metre bus, forwards as well as backwards,” an institute statement said.

“There’s no problem with the manoeuvrability and stability, but we have to see how such a long bus affects normal city traffic,” said Klingner.

He added that the project had received a lot of interest from cities around the world looking for a cheap public transport system. “The basic problem is expense,” he said.

“Building a tram from scratch nowadays, including all the necessary infrastructure, power lines and so on, costs around €10 million per kilometre.”

Klingner said there had been a lot of interest from cities in the developing world, Russia, and some German towns, including Würzburg and Ingolstadt.

“But in Dresden itself it probably won’t be needed,” he added. “There is already a pretty well-developed tram system here.”

The Autotram also runs on a fuel-efficient hybrid engine, which integrates a combustion engine and electric motors. It can travel eight kilometres on pure battery power.