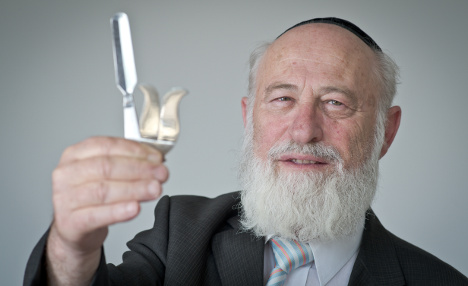 “Until now there is no law which bans circumcision,” said David Goldberg on Wednesday after he was reported to the state prosecutor by a doctor.

“We received an official report against a rabbi in Hof, from a doctor in the state of Hesse,” state prosecutor Gerhard Schmitt told The Local.

“It was in connection with the circumcision of infant boys, and was cited as bodily harm, with reference to the verdict of a Cologne court.”

He said the report would be examined by a colleague who would decide whether there was reason enough to charge the rabbi.

He would take into consideration not only the Cologne court verdict, which said non-medical circumcision should be seen as bodily harm, but also parliamentary efforts towards a law legalising religious circumcision – and the discussion in the media.

This would certainly take a few weeks, said Schmitt.

Goldberg said he conducts around 30 circumcisions a year, sometimes in the presence of a doctor, sometimes not. He said he would never use anaesthetic, as that would be more dangerous for the baby. “The children always peacefully fall asleep just a few minutes after the procedure,” he said.

He said the report against him was motivated by anti-Semitism.

The doctor who reported him was named on Wednesday as Sebastian Guevara Kamm from Gießen, Hesse.

“I see myself bound by a duty to protect children, and that is not only concerning ritual circumcisers but also medical colleagues,” he said.

He accused Goldberg of carrying out the circumcisions in places not suitable for medical procedures, and said that the rabbi was not qualified as a doctor.

The Cologne district court ruled in June that a doctor who circumcised a boy for non-medical reasons was guilty of bodily harm, although it did not punish the man concerned. This set off a global debate, as Muslims and Jews have circumcised their boys for millennia and there is legal uncertainty about the issue in Germany.

The Justice Ministry is expected to put together a draft law along these lines. Justice Minister Sabine Leutheusser-Schnarrenberger said on Wednesday her officials were working intensely on the job and would present a draft law to parliament in the autumn.

Family Minister Kristina Schröder has called for the use of “appropriate anaesthetic” during circumcisions.