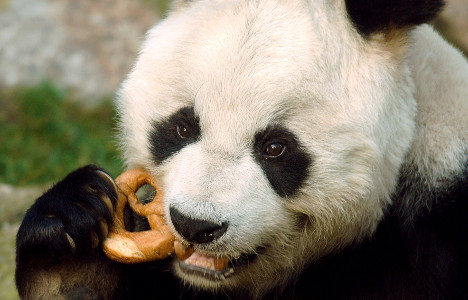 Long before Knut the polar bear rose to superstardom, Bao Bao was Berlin’s best bear – a present from then Chinese communist leader Hua Guofeng to Chancellor Helmut Schmidt during a Cold War state visit in November 1980.

The much-travelled bear initially lived with his companion Tjen Tjen, but she died in 1984 before he reached sexual maturity.

He then whole-heartedly embraced life as a carefree bachelor – despite the best efforts of his keepers. Even for his notoriously choosy species, Bao Bao proved difficult to please sexually, though he had plenty of offers. He was after all one of the zoo’s star animals.

He spent two years in London from 1991 to 1993, where zookeepers vainly tried to persuade him to mate with a female called Ming Ming.

During another Chinese state visit to Berlin, this time by Li Peng in 1994, another panda was promised to the city’s zoo and a year later Yan Yan arrived to try to tempt Bao Bao.

All attempts to persuade them to mate proved unsuccessful and the cruelly rejected female died in 2007 aged 22.

Yan Yan was to be Bao Bao’s last companion before he entered dotage.

The last panda in Germany died “peacefully in his sleep” early on Wednesday morning, the zoo said.

An autopsy is underway to determine the cause of death. “He reached a proud old age,” said zoo director Bernhard Blaszkiewitz.

Tributes have been pouring in from panda lovers all over the world. Volker Homes, head of the German branch of the World Wide Fund for Nature (WWF), described Bao Bao as “an important symbol for international animal conservation, and an ambassador for the issues concerning his endangered cousins in the wild in Asia.”

The WWF says there were only around 1,600 pandas in the wild in the forests of China and Myanmar. Their habitat has been extensively reduced in the past few years, as jungles are turned into fields. They generally live very isolated lives, and need to spend up to 16 hours a day eating.

Very few pandas are still kept in European zoos, where they can reach an age of 35 – around ten years longer than in the wild.