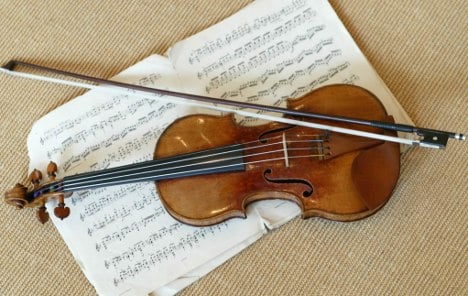 A Stradivarius violin of similar value as the Guarnerius. Photo: DPA

When she tried to walk through the green gate for travellers arriving in the EU with nothing to declare, customs officers stopped her and said she needed to pay €190,000 in duty on her 1741 Guarnerius violin.

On top of this were fines, taking the total cost to an eye-popping €380,000 euros, the Tokyo-based paper said.

Customs confiscated the valuable instrument because she could not provide the documents for her 1986 purchase, the Yomiuri said.

“The instrument is a tool for my work. For musicians, instruments are like parts of your bodies,” she told the Yomiuri.

“I have used Frankfurt Airport many times and never had problems like this before. I don’t know why this happened.”

She has since submitted documents to prove her ownership of the violin, but negotiations have been difficult, the paper said, quoting the musician.

Horigome, who has worked in Europe for three decades, said she would also contact the governments of Japan and Belgium to see if they could help.

A spokesman for the German authorities has suggested that the violin might be returned if it is regarded as necessary for her job, the paper said.

Guarnerius violins are considered among the world’s best, ranked alongside those made by Stradivarius and Amati.

Horigome plays in cities around the world with top conductors and orchestras, including the Berliner Philharmoniker, the London Symphony Orchestra, and the New York Philharmonic.