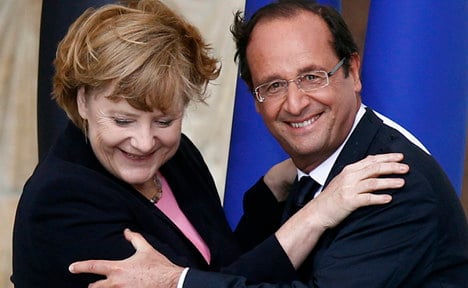 As leaders of the bloc’s top two economies, the pair carry the weight of expectations that they will drive decisive action to remedy the near three-year crisis, despite their differences.

The timing of the evening summit in the German capital is no coincidence – Merkel will host the Greek prime minister in Berlin less than 24 hours later before he meets Hollande in Paris Saturday.

Antonis Samaras will reportedly try to persuade his European partners to extend a deadline for swingeing spending cuts to keep Greece in the 17-nation eurozone after first meeting Eurogroup chief Jean-Claude Juncker on Wednesday.

Germany, Europe’s effective paymaster, has insisted Athens must stick to the timeline and reforms agreed in return for its second rescue package, while France is seen as more flexible.

“The aim is to discuss flexibility in return for assurances and the two want to have a common line before the arrival of the Greek prime minister,” Claire Demesmay, of the German Council on Foreign Relations, told AFP.

Ulrike Guérot, a political scientist at the European Council of Foreign Relations, said the meeting would be closely watched ahead of key decisions next month.

“The markets want to know if visions are the same in Berlin and Paris,” she said.

Greece, scrambling to find about €11.5 billion through drastic cuts and reforms in its fifth year of recession, is avidly awaiting a progress report by its international creditors, meanwhile.

The verdict, due in September, by the so-called Troika – European Commission, International Monetary Fund and European Central Bank – will determine whether Athens gets the next slice of its bailout.

Without the funds –  worth some €31.5 billion – Greece’s government is expected to quickly run out of cash and face a default that many analysts believe would force it to leave the eurozone.

Before this week’s diplomatic flurry, Athens said it only had €700 million of the €11.5 billion of cuts still to find, with a report it would argue for spreading them over four years, from 2013, instead of two.

Berlin has played down expectations of Merkel’s meetings with both Hollande and Samaras saying no “significant decisions” or “strong positions” were expected to emerge.

“The basis for all decisions in the case of Greece is the report of the troika,” Merkel’s spokesman Steffen Seibert said. Their discussions over dinner will also cover Syria, he said.

Paris sees the meeting as a chance to forge common ground on the Greek crisis, which continues to undermine the credibility of the euro, well-informed sources said.

But France also wants to hear from Samaras what progress Athens has made in terms of reforms demanded by the creditors.