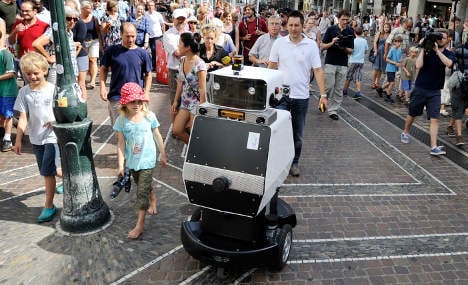 Obelix the robot managed to navigate a busy shopping district without any help from its creators, recognising objects in its way and steering around them.

Where computer maps of an area are available, it can use those, but otherwise can effectively draw its own as it goes along.

The students responsible were drawn from universities in Germany, UK, Belgium and Switzerland, cooperating to make a robot which can take the capabilities already developed for helping people in their homes out onto the streets.

The European Robotic Pedestrian Assistant (Europa) has received more than €6 million in European funding over the last three years – and led by the Freiburg Albert-Ludwig University, has produced Obelix.

Although three students accompanied their boxy robot on Tuesday morning, they did not have to step in – the machine was operating completely alone.

“Obelix is capable of finding its way from the starting point to a goal we set,” said Bastian Steder, one of the Freiburg students. The robot uses lasers to detect objects in its way, and scans the space ahead, following people as they move, and finding a route which avoids any collisions.

For all the computing power that may be inside, Obelix’ exterior is pure 1970s, an armless body and square “head” mounted on four sturdy wheels.

There also seems to be a number of challenges still to be tackled – although Obelix managed a four-kilometre trip on Tuesday, it took one-and-a-half hours to do, largely because as it scans and processes what it sees, it moves very slowly.

Despite this, the idea is for the robot to be used to save people leaving their homes – and go out to do the shopping or carry out other errands for them. They might also function as tour guides, or helpers for the elderly or wheelchair users, the developers said.

But despite its €125,000 price tag, Obelix cannot deal with steps of more than three centimetres, and cannot recognise traffic lights.

“Traffic lights are the only areas where we have to intervene,” said Steger.

Project leader professor Wolfram Burgard acknowledged that perhaps Obelix might not enter everyday use as it is at the moment. “But our understanding will certainly contribute to further developments,” he said.

Other questions which have not yet been answered include how to protect it from theft – either the shopping it might be carrying or the entire robot itself.

Questions of liability if Obelix is involved in an accident would also have to be answered before shopping robots hit the streets alone.