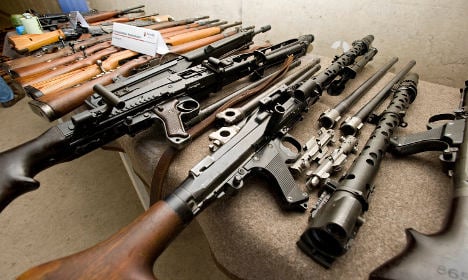 “Something could have very easily happened and that could have been terrible,” said the judge at the Bad Kreuznach court on Tuesday.

The 64-year-old who has been nick-named “Powder Kurt” for his love of gunpowder, collected 40 kilos of explosive and dozens of weapons, keeping them in his house and a shed outside with little security.

His collection was said to be one of the largest found in private possession in Germany since the war. He was convicted of several counts of breaking weapons and explosives laws.

His defence asked for two years on probation, while the prosecution had called for the man to be jailed for four years.

The collection also included a bazooka, mines, several hand grenades and a number of machine guns.

“I just want to say again that I am very sorry, and I would like to apologise to all those involved,” the man said at the end of the trial, before weeping.

He said he had specifically hired the shed to store some of the collection, as “I did not want it in the house.”

Detectives found boxes of guns, ammunition and gunpowder in his house as well. But the biggest danger was posed by several boxes of explosives in the shed, stacked on the back of a truck. The material was in such poor condition that it could have spontaneously exploded, an expert from the state criminal office told the court.

A robot was brought in to remove the boxes and take them to a nearby field to be blown up.