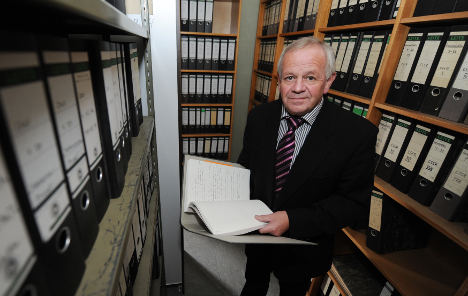 The Central Office of the Judicial Authorities for the Investigation of National Socialist Crimes said its investigation into the man was completed and had been handed to the public prosecutor in Weiden, Bavaria.

The man, who lives outside Germany, worked at the camp from at least April 1944, in closing off ramps leading to gas chambers, in guard duties around the camp, and in shifts on the watchtowers. This is enough to consider him having made a “causal contribution to the murderous crimes,” the Central Office report concluded.

The public prosecutor confirmed it had received files which it would take several weeks to check.

Head of the Central Office Kurt Schrimm said May’s conviction of Demjanjuk had been crucial to his continued work in putting together this prosecution case. “The verdict of Munich district court burst the dam,” he said.

Before that verdict courts had required proof of individuals personally taking part in a murder to convict them.

But since the conviction of Demjanjuk this is no longer the case. He was convicted of helping to murder at least 28,000 people at Sobibor death camp in Poland simply due to the fact he worked there as a guard.

Judge Ralph Alt said he was convinced that Demjanjuk was a guard at the death camp “and that as guard he took part in the murder of at least 28,000 people.”

Demjanjuk was sentenced to five years in prison but was immediately released pending appeal and moved into an old people’s home in the sleepy Bavarian town of Bad Feilnbach where he died in March.

The Demjanjuk ruling prompted the Central Office to re-examine the cases it had closed against surviving suspected Nazi war criminals. Schrimm said he was looking at 20 cases of people who had worked at Sobibor, Treblinka, Belzek, Kulmhof and Auschwitz.

In a separate case, the public prosecutor in Stuttgart said on Monday it was soon to decide on whether to prosecute a man involved in the 1944 attack on the Tuscan village of Sant’ Anna di Stazzema in which an estimated 560 people were killed.